A research article on the making of the chip was published in the journal Advanced Materials.

A team of researchers led by the University of Melbourne used a technique to implant singular phosphorus atoms onto a silicon wafer. Previously, embedding atoms in silicon has involved showering a wafer with phosphorus, becoming implanted randomly across it.

"We embedded phosphorus ions, precisely counting each one, in a silicon substrate creating a qubit 'chip," which can then be used in lab experiments to test designs for large scale devices," said Professor David Jamieson of The University of Melbourne, lead author of the paper.

The team's vision is for the technique to be scaled up to produce significantly larger-scale quantum devices. Their technique involves a precise atomic force microscope, able to position itself with the accuracy of only half a nanometer.

"This will allow us to engineer the quantum logic operations between large arrays of individual atoms, retaining highly accurate operations across the whole processor. Instead of implanting many atoms in random locations and selecting the ones that work best, they will now be placed in an orderly array, similar to the transistors in conventional semiconductors computer chips," said Andrea Morello of the University of New South Wales, a joint author of the paper. 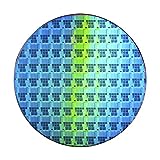