On Tuesday, an asteroid that is approximately the size of a house safely flew past Earth, and while it was passing by, it was photographed. 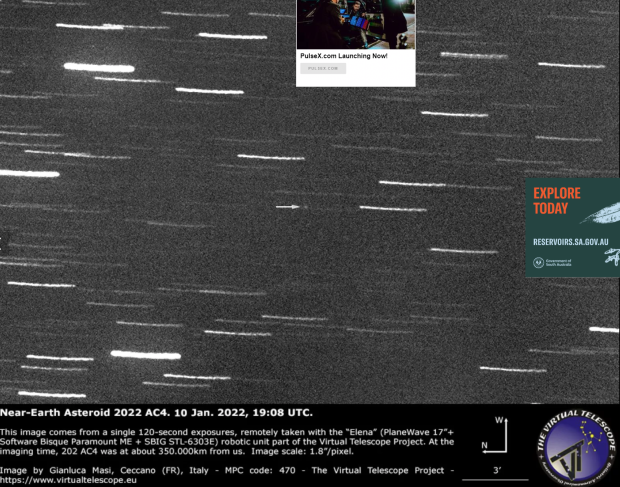 On January 11 at 12:19 am ET, an asteroid dubbed 2022 AC4 that measures anywhere between 14 and 31 feet in diameter cruised past Earth at 18,700 mph. NASA's database that tracks all Near-Earth-Objects (NEO), the Center for Near-Earth Object Studies (CNEOS) indicates that the asteroid came within 58,000 miles from Earth, and while this sounds like a large distance, the moon is 221,500 miles away from Earth.

Additionally, NASA's database states that 2022 AC4 was the closest asteroid to approach Earth in the last two months. During its fly-by, Gianluca Masi, the manager of the Virtual Telescope Project in Italy, tracked the asteroid in the sky and took a 120-second-long exposure shot that can be seen above. While asteroid 2022 AC4 was quite close to Earth, NASA doesn't classify the object as a "potentially hazardous asteroid (PHA)" as the agency only considers asteroids PHA's if they come within 4.6 million miles of Earth and are greater than 500 feet in diameter.