In a new paper published in Space: Science & Technology, a team of researchers have created a new lightweight robotic arm with precision controls. 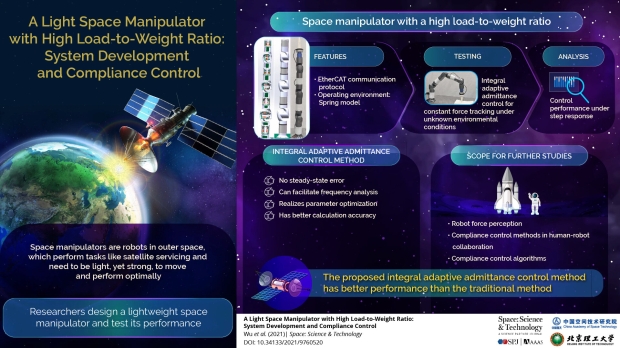 As missions in space increase in scope and variety, so to will the tools necessary to accomplish them. Robots are already used throughout space, but robotic arms used on Earth do not translate well to space. A flat plane relative to the ground enables Earth-bound robotic arms to articulate freely in a three-dimensional coordinate grid with relatively simple programming. However, with constantly changing environments in space, a robotic arm would struggle to orient itself correctly.

Researchers from the Harbin Institute of Technology's (HIT) School of Mechanical Engineering and Automation have developed a robotic arm with the ability to adjust its position and speed in real-time based on its environment. The arm weighs 9.23 kilograms (20 pounds) and can move almost a quarter of its weight.

"In order to solve the problems of strict restrictions on the mass and size of the manipulator, as well as the high requirements for reliability and safety of the control method in space operation, we developed a light space manipulator and proposed a new control method," said Wenfu Xu, a professor at the HIT School of Mechanical Engineering and Automation and State Key Laboratory of Robotics and System, and corresponding author of the paper.

The researchers needed to develop a new control system to ensure the light space manipulator can constantly control its force output in unknown environments. Control systems for known environments use a steady-state correction system that accounts for minor deviations and allows a robot to adjust accordingly. In a constantly changing environment like space, simple error correction methods would compound to create more errors than otherwise. The integral adaptive admittance control they proposed could adjust for and more precisely follow an unknown surface than a traditionally controlled manipulator.