NASA's Curiosity Rover continues to explore the surface of Mars and has sent back a new 360-degree panoramic selfie.

The rover landed on Mars in August 2012 and has roamed the Gale Crater, Mount Sharp, and many other Mars locales in search of past life since. Curiosity was built by NASA's Jet Propulsion Laboratory (JPL) in Southern California, which Caltech manages from Pasadena, California.

Using the Mars Hand Lens Imager (MAHLI) at the end of Curiosity's robotic arm, the image comprises 81 individual shots taken on November 20th, 2021. That date was the 3303rd Martian day, or sol, of Curiosity's mission. The MAHLI was built by Malin Space Science Systems in San Diego.

Behind the rover is the rock structure Greenheugh Pediment, and the hill to the right of the center of the image is Rafael Navarro Mountain. Curiosity is currently headed toward the Maria Gordon Notch, the U-shaped clearing behind the river to the left of the picture. 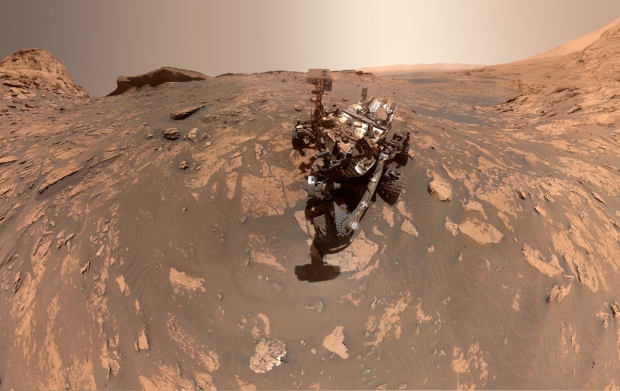 A close up view of the rover from the same collection of selfies.