A man that was armed with a metal detector discovered a heavy rock that he believed was gold, but after further analysis, it was found to be much more valuable. 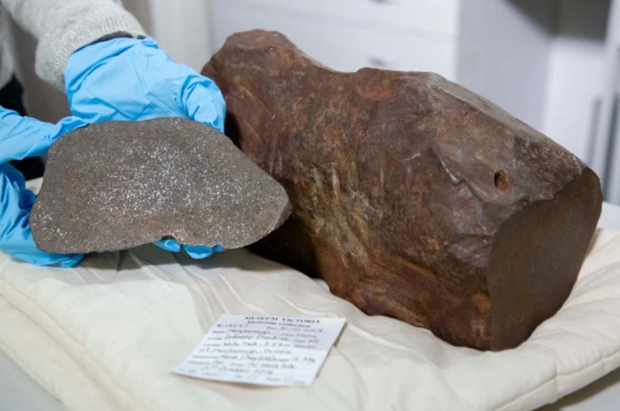 David Hole discovered the large rock back in 2015 when he was prospecting with a metal detector in Maryborough Regional Park near Melbourne, Australia. After finding the rock, he took it home and attempted to open it, thinking that there would be a gold nugget inside. Hole tried opening the rock with a rock saw, angle grinder, drill, and even acid. All of which didn't work. Years later, Hole took the rock to the Melbourne Museum for identification, and that's when he discovered what he found wasn't a heavy rock with gold potentially in the middle, but a large meteorite.

The meteorite weighed in at 37.5 pounds and after using a diamond saw to dissect a small portion of it, researchers discovered that its composition is a high percentage of iron, meaning that the meteorite is classified as a chondrite. Melbourne museum geologist Dermot Henry told The Sydney Morning Herald, "Meteorites provide the cheapest form of space exploration. They transport us back in time, providing clues to the age, formation, and chemistry of our Solar System (including Earth)."

Adding, "Some provide a glimpse at the deep interior of our planet. In some meteorites, there is 'stardust' even older than our Solar System, which shows us how stars form and evolve to create elements of the periodic table. Other rare meteorites contain organic molecules such as amino acids; the building blocks of life."

Henry went on to explain that the meteorite found by Hole likely came from the asteroid belt located between Mars and Jupiter and that carbon dating indicates that it landed on Earth between 100 and 1,000 years ago.