Astronomers have managed to detect using telescopes the first evidence of a black hole outside of our Milky Way galaxy. 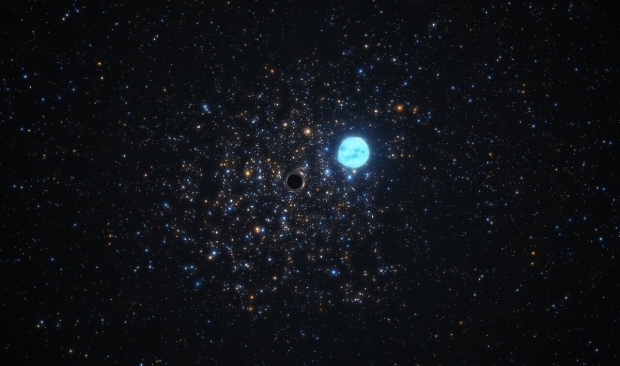 The study will be published in the Monthly Notices of the Royal Astronomical Society and details a team of astronomers using the European Southern Observatory's Very Large Telescope (VLT) to observe the Large Magellanic Cloud about 160,000 light-years away from Earth. The researchers were looking for any stars showing signs of gravitational anomaly that may mean a black hole is nearby, and they found one, a star five times the mass of the Sun.

The star was showing blips in its motion, and after performing further analysis, the researchers discovered it was a black hole with around 11 times the mass of the Sun. The black hole was located in NGC 1850 and is estimated to be only 100 million years old, which is extremely young when considering some of the ages of other celestial objects in the universe.

Sara Saracino, an astrophysicist at Liverpool John Moores University in England, said, "Similar to Sherlock Holmes tracking down a criminal gang from their missteps, we are looking at every single star in this cluster with a magnifying glass in one hand, trying to find some evidence for the presence of black holes but without seeing them directly."

Saracino added, "The result shown here represents just one of the wanted criminals, but when you have found one, you are well on your way to discovering many others, in different clusters."