Officials have confirmed that several coronal mass ejections (CME) are on the way from the Sun, some of which are directly in line to impact Earth.

NOAA Space Weather Prediction Center confirmed with an update that several CMEs erupted on the Sun on the 1st and 2nd of November. With the data, the researchers applied it to their current models and found that there are "likely Earth-directed components to a few of them."

NOAA notes that the CMEs came from the southwest area of the Sun, with one CME being linked to a C4 flare from NOAA/SWPC Region 2887 at 01/2133 UTC (02/1:33 am EDT) and another CME being related to an M1 flare (R1-Minor Radio Blackout) from Region 2891 at 02/0301 UTC (02/7:01 am EDT) near the center disk. Additionally, NOAA states that its confidence in the measures of the Earth-directed components remains at "moderate" levels, "while there is less confidence in timing and intensity." At the time of writing this, current predictions state that there are G1 (minor) Geomagnetic warnings for November 3 and 4 that coincide with the arrival of the blasts. 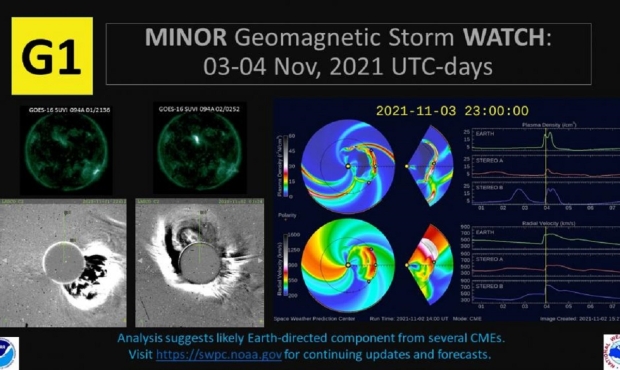