NASA has taken to its blog with a new image and video centered around the Hubble Space Telescope and what it has recently snapped an image of.

According to the blog post, which can be found on the NASA website, the Hubble Space Telescope is celebrating Halloween with "creepy celestial sights". The above video posted to the NASA Goddard YouTube channel details Hubble's observation of a "giant space spider-web", which is actually the destruction of the red giant star named CW Leonis, located 400 million light-years away from Earth.

The "cobwebs" are dusty clouds of "sooty carbon engulfing the dying star", and after being created through nuclear fusion in the star's interior, it's thrown out into the void of space around it, providing raw materials for future star formation. CW Leonis is the closest carbon star to Earth, and due to its position and nature, astronomers have a great prospect of understanding how carbon stars interact and evolve with their surroundings. Over the past 15 years, researchers have observed a dip in the brightness radiating out of CW Leonis, which is an extremely small amount of time in astronomical terms. 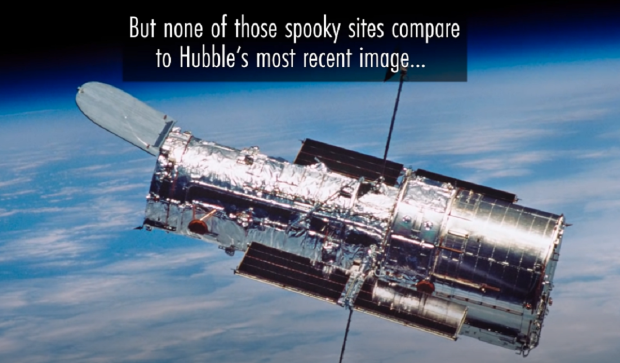