A team of astronomers has claimed that they may have detected the first planet outside of our Milky Way galaxy.

The study from the researchers has been published in Nature Astronomy and details a possible exoplanet candidate that resides in the spiral galaxy Messier 51 (M51), or Whirlpool Galaxy, located 28 million light-years away. The astronomers used NASA's Chandra X-ray Observatory that specializes in observing celestial objects in X-rays and used the transit technique to observe the possible exoplanet.

]The transit technique is quite simple to understand - imagine looking at a star and then seeing a drop in its brightness. From this drop you can infer that a celestial body is orbiting the star and has passed in between the observational line drawn from the telescope to the star. This technique is widely used by astronomers searching for exoplanets in optical light, but is rarely used by astronomers using X-ray-based telescopes.

However, the same principle can be applied when using X-ray telescopes and could even be more effective due to most, if not all, of the detected X-rays dropping off when an object passes in front of the star.

Rosanne Di Stefano of the Center for Astrophysics | Harvard & Smithsonian (CfA) in Cambridge, Massachusetts, and lead author on the recently published study, is attempting to change that with this observation. "We are trying to open up a whole new arena for finding other worlds by searching for planet candidates at X-ray wavelengths, a strategy that makes it possible to discover them in other galaxies."

Adding, "Unfortunately to confirm that we're seeing a planet we would likely have to wait decades to see another transit. And because of the uncertainties about how long it takes to orbit, we wouldn't know exactly when to look."

Co-author of the study, Julia Berndtsson of Princeton University in New Jersey, said, "We know we are making an exciting and bold claim so we expect that other astronomers will look at it very carefully. We think we have a strong argument, and this process is how science works." 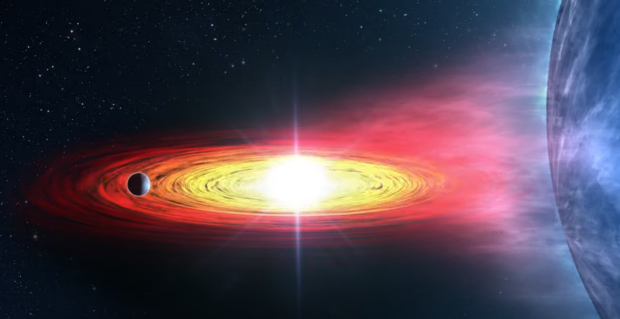