A team of marine biologists has been left baffled at the discovery of a giant sea creature as they were exploring a sunken ship.

The team at OceanX was investigating the sunken ship called "Pella", which sadly sunk 2,300 feet to the ocean floor in November 2011. According to the video post to the OceanX YouTube channel, the team of researchers sent their remotely operated vehicle (ROV) down to the ship to investigate the wreckage, and when observing the bow of the ship, a creature "larger than a human" did its own investigation of the ROV.

OceanX science program lead Mattie Rodrigue said, "I will never forget what happened next for as long as I live. All of a sudden, as we're looking at the bow of the shipwreck, this massive mysterious creature comes into view, takes a look at the ROV, and curls its entire body around the bow of the wreck." The researchers go on to say that they are yet to identify what the creature is, but suspect it's a species squid, which species exactly has yet to be confirmed, but the team is consulting with experts.

Zoologist Dr. Michael Vecchione said, "I can tell you what I think it is and why I think it is. I think it's a species called the purpleback flying quid. And in the area that you're operating, in the Red Sea, there's a well-known population of those. They get really big. I think what you're seeing is what's called the giant form of Sthenoteuthis."

Adding, "They will approach a bait the way that that one approached that bait and they often swim the way that the other videos showed the animal swimming. And in particular, the fin size, the proportions of the fin relative to the body, show me that it's not a giant squid. If you stop it right there, you see it's got fins that are short and broad and sort of thicken together. They look like sort of an arrowhead. I know that you probably wanted to think that you had some video of giant squids, but I can tell you but I'm absolutely certain it's not an Architeuthis dux." 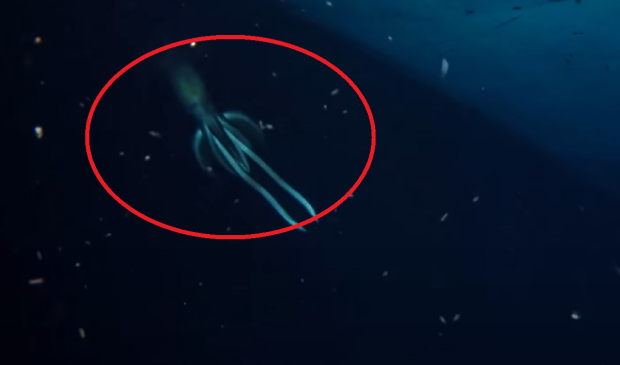