NASA's Perseverance rover that's stationed on Mars in the Jezero Crater has been spotted from above by a passing satellite. 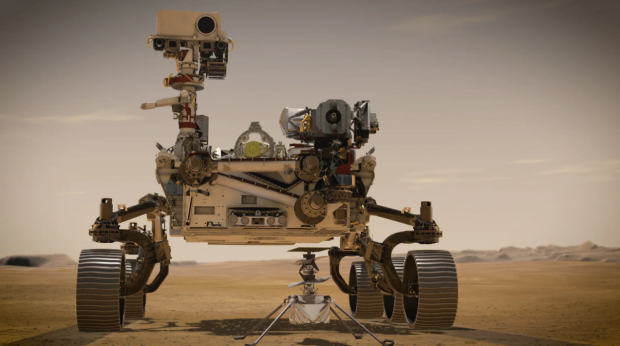 Perseverance landed in the Jezero Crater back in February earlier this year, and since its landing, it has been exploring the area that surrounds it along with its helicopter companion Ingenuity. Perseverance is on the Red Planet to collect samples of rock and dirt to eventually transport them back to Earth for researchers to analyze.

Ultimately, Perseverance has been sent to Mars to hunt for signs of ancient microbial life, and recently studies confirmed that the location where Perseverance is stationed was once a large lake and a river. NASA's Mars Reconnaissance Orbiter passed over Perseverance exploring the Jezero Crater and managed to snap a birds-eye-view of the rover, the image is located above. Communication between NASA, the rover, and its companion has temporarily been paused as Earth and Mars move to opposite sides of the Sun.

For a further explanation of why it's necessary for communication to be halted, check out this link here.