Humans are now looking towards Mars as our next planet to colonize, but it isn't just a matter of getting in some rockets and touching down. There are significant challenges ahead of us. 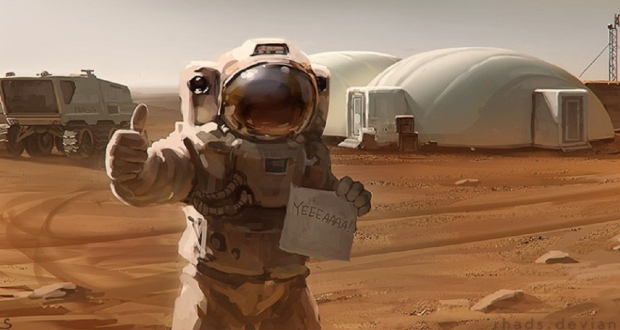 It's far expensive, not to mention time-consuming, to transport all of the items needed for a sustainable human outpost on Mars. As a solution, NASA officials suggest that researchers need to devise ways astronauts will be able to construct a viable outpost on Mars using the environment around them. A new study has explored how astronauts could piece together a building and what material the structure could be made out of.

The researchers detailed in the study that bricks of concrete could be made using Martian dirt combined with a protein that is found in human blood and a compound called urea, which can be sourced from astronaut sweat, tears, or urine.

Aled Roberts, a researcher at the University of Manchester in England and lead author on the new study published in the journal Materials Today Bio said, "Scientists have been trying to develop viable technologies to produce concrete-like materials on the surface of Mars, but we never stopped to think that the answer might be inside us all along."

The scientists wrote in the new study, "If HSA-ERBs were utilized as a mortar and combined with a sandbag-based construction method, our calculations suggest that each crewmember - over the course of a 72-week Mars mission - could produce enough HSA to construct habitat-space to support an additional astronaut. This could allow the steady expansion of a nascent Martian colony."

The researchers recognize that for this plan to work, astronauts would need to have their blood collected on a regular basis, which may cause health risks when considering that all astronauts on Mars will be constantly exposed to high doses of radiation and other potential health impactors.

"Despite this, we believe that HSA-ERBs could potentially have a significant role in a nascent Martian colony, but will eventually be superseded by versatile bioreactors or other technologies as they mature," the researchers wrote.