"Abandoned was announced too soon. Also, we received a bigger audience than we initially had, so we had to polish the game even more. Even now, the game isn't ready for the public eye to see. We will release all media inside the Realtime Experience app and web for actual gameplay reveals and cinematic trailers," the site reads.

Blue Box Game Studios is one of the most widely-disliked game devs in existence right now and it's all thanks to how it chose to market Abandoned, its mysterious new horror game Abandoned. Something has been off about Blue Box and Abandoned from the get-go, and gamers speculated it could be a secret Hideo Kojima publicity stunt complete with a fake studio--not unlike the 7780s Studio Kojima had set up for P.T., or the notorious Moby Dick Studio established for Metal Gear Solid V with its fake CEO Joakim Mogren.

The Blue Box Game Studios fan theory rabbit hole goes deep, and studio head Hasan Khamaran did his part to feed speculation on two separate occasions, first leading gamers to believe Abandoned is related to Silent Hill, and then with a teaser image of a character with an eyepatch--a nod to Snake, perhaps. Kharaman event went so far to reveal himself and say he has no association with Kojima, but this didn't do much to extinguish speculation. himself

The hype hit a wall when the Abandoned Realtime Experience App--a confusing and weird experimental app on PS5 that will "host" interactive media and announcements--released on PS5 and turned out to be a 5GB video that everyone had already seen.

Since then, Blue Box Game Studios has been very quiet about Abandoned and there haven't been many updates outside of the FAQ page. Abandoned was originally set for a release in Q4 2021. The game has been pushed back to a nebulous 2022 release. 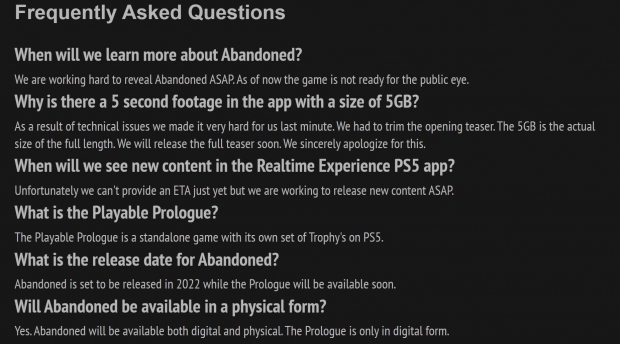