If you haven't heard about the Carrington event then I suggest you read up on it, but back in 1859 there was a gigantic solar flare that -- if it happened now -- would knock us back into the Stone Age. 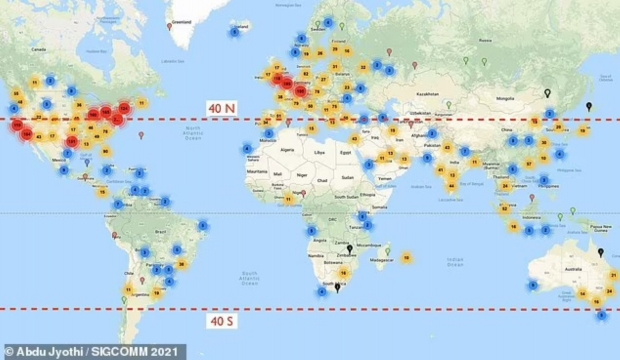 But in a new study, Sangeetha Abdu Jyothi of the University of California, Irvine warned that a solar storm could knock the internet down for weeks if not more. In the presentation titled "Solar Superstorms: Planning for an Internet Apocalypse" found that local and regional Internet infrastructure could be hit but they would be fine -- the long undersea cables on the other hand, are at risk.

Why? The local and regional internet infrastructure isn't at a high risk because the optical fiber isn't affected by geomagnetically induced currents -- meanwhile, short cable spans are grounded regularly. But, undersea cables on the other hand... would be knocked out of operation. The reason is that there are repeaters under the sea that connect the internet cables, at around 50-150km apart.

The repeaters amplify the optical signal, so if there was a Carrington-style solar storm, the electronic internals of the repeaters would have their asses kicked. If enough of the repeaters were affected, it would make the entire undersea cable useless. This means large chunks of the internet would be out of order, and we won't know how bad it will be until after it happens -- maybe not even then, because most of the internet wouldn't work so we wouldn't be able to read about the news.

Professor Abdu Jyothi concluded in her paper: "A powerful solar superstorm has the potential to cause massive disruption of the Internet. Paying attention to this threat and planning defences against it, like our preliminary effort in this paper, is critical for the long-term resilience of the Internet".

Abdu Jyothi told WIRED ahead of her talk: "What really got me thinking about this is that with the pandemic we saw how unprepared the world was. There was no protocol to deal with it effectively and it's the same with Internet resilience. Our infrastructure is not prepared for a large-scale solar event. We have very limited understanding of what the extent of the damage would be".