PlayStation gamers are once again pushing back against the new $70 Ghost of Tsushima Director's Cut re-release by review bombing the game on Metacritic. 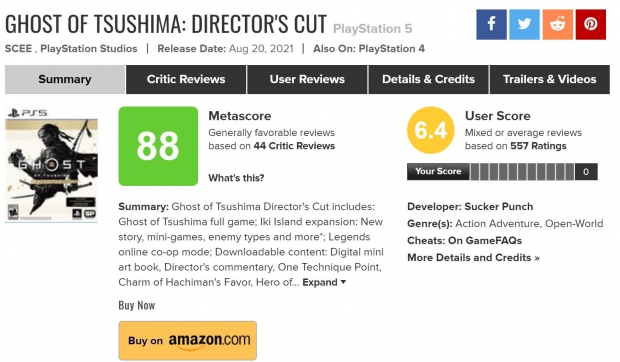 Ghost of Tsushima is one of the most universally lauded PlayStation exclusives of our time. It's received a handful of perfect scores, and gamers give near-unanimous praise of the colorful and mystical samurai slasher. But gamers were upset when Sony announced Ghost of Tsushima's PS5 upgrade would be locked behind a $70 paywall--unlike most games that offered free next-gen upgrades, including Hellblade which now has raytracing on Series X.

It turns out that Ghost of Tsushima's Director's Cut doesn't offer many performance benefits outside a boost in fidelity resolution. There's other features like a lock-on system and DualSense haptic feedback. Now gamers are review bombing the Director's Cut on Metacritic to send a message to Sony and developer Sucker Punch. At the time of writing there is 191 negative review scores--mostly 0's--and 341 positives to help offset the bad reviews.

This isn't the first time gamers have pushed back against the Director's Cut. In July, gamers on Reddit shared their frustration by boosting a post critical of Ghost of Tsushima's Director's Cut past 20,000 upvotes. There are a ton of comments about waiting until the game is cheaper and discounted before buying--or even re-buying--the game on PS5.

It remains to be seen how well the Director's Cut performs insofar as sales, but Sucker Punch and Sony have justified the price hike by bundling performance and QoL options alongside the new Iki Island expansion--which is also being criticized for being too short for the premium cost.