With over 30 million sales across half a dozen re-releases, Skyrim is one of Bethesda's biggest cash crops. A new harvest is coming in 2021. 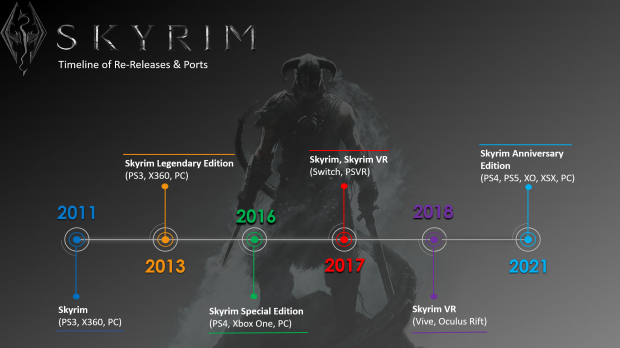 Skyrim will turn 10 years old in November. Bethesda is celebrating by re-releasing the game for the sixth time on a new generation of consoles (PS5 and Xbox Series X/S). The new Skyrim Anniversary Collection features a ton of Creation Club mods and upgrades on next-gen console hardware. Like Grand Theft Auto V, Skyrim will also have spanned three major console gens in 2021.

Taking a look back at Skyrim's timeline shows impressive sales elasticity across multiple platforms. In November, Skyrim will have released seven times in the last 10 years, including six re-releases across Xbox, PlayStation, Nintendo Switch, and even console and PC VR headsets.

Each of Skyrim's releases have capitalized on some new addition, whether it be the expansions and DLC in the Legendary Edition, or the ambitious console mod support in Skyrim Special Edition. The Switch port shows remarkable flexibility and the VR ports are impressive in their own right--few huge open-world RPGs can actually scale properly into a virtual reality form factor.

The upcoming Skyrim Anniversary also makes big improvements and even combines Creation Club content in one package. The idea is to include some of the best user-created mods to make things much easier for players to expand their game.

Thanks to these re-releases, Skyrim has been a boon for sales. As of 2016 the game has sold over 30 million copies. We don't know the full updated numbers.

This might be the last Skyrim re-release until The Elder Scrolls VI launches.