Elon Musk hosted his new Tesla AI Day today, and the huge multi-hour show is worth a watch and has some incredible technology that was teased -- but one of them is that Tesla is building its own robot, the Tesla Bot.

The new Tesla Bot is 5'8" and weighs 125 pounds, it is built from "lightweight materials" and has "human-level hands". There are 40 electromechanical actuators through the arms, neck, torso, hands, and legs which will make the Tesla Bot the most human-looking and moving robot yet.

Inside, there's next-gen AI inside with Tesla's FSD (Full-Self Driving) computer inside of the Tesla Bot, with autopilot cameras feeding into neural networks with neural net planning allowing the robot to be the most advanced robot on Earth. Musk said that they wanted to build a robot that would navigate the world that was built for humans, but they made it small enough and weak enough that you'll be able to overpower it or outrun it -- probably. 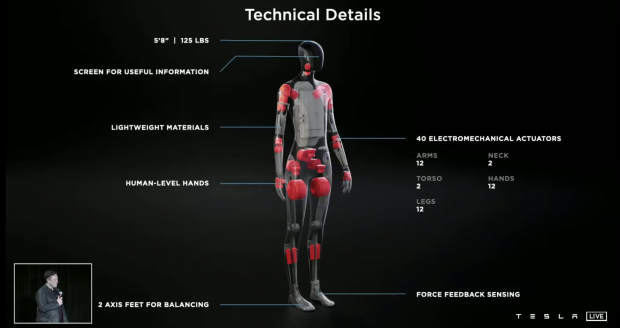 Musk had a few (evil) chuckles saying that you should be able to run away from the Tesla robot, that because it's limited to 5mph that if you can run faster than that, Musk says "you'll be fine". A prototype of the Tesla Bot will be made sometime in 2022.

Musk said "can a robot go out into the world -- can you talk to it, tell it to pick up a bolt and attach it to a car -- with that wrench -- and it should be able to do that. It should be able to [be asked] please go to the store and get me the following groceries". 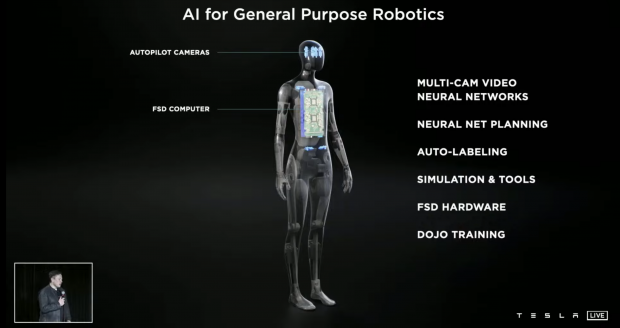 Musk then talks about universal basic income, saying that the future of rotoics will probably usher in UBI but "not right now, because the robot doesn't work... we just need a minute".

"Physical work will be a choice, if you want to do it you can -- but you won't need to do it".

"This obviously has profound implications for the economy, because the economy at its foundational level is labour -- I mean, capital equipment is just distilled labor. Uh, then is there any actual limit to the economy? Maybe not".

Join our team and help build this.