All NewsBusiness, Financial & LegalCases, Cooling & PSUContests & GiveawaysCPU, APU & ChipsetsDealsDisplays & ProjectorsGamingMotherboardsScience, Space & RoboticsStorageVideo CardsVirtual & Augmented Reality
All ReviewsAll ArticlesAudio, Sound & SpeakersCases, Cooling & PSUCPUs, Chipsets & SoCsComputer SystemsDisplays & ProjectorsGamingMotherboardsNetworkingPeripheralsStorageVideo Cards
GuidesGamingAsk the ExpertsNewsletterAboutForums
Windows 11Halo InfiniteBattlefield 2042Elon MuskGTA 6RTX 3080HDMI 2.1Bitcoin Mining
TRENDING NOW: Largest known comet ever discovered, and we will be able to see it
If you thought the new 1GB HD 2900 XTs were pretty badass, wait'll you set your eyes on this monster from Diamond. Engadget report that they are planning to release a HD 2900 XT based graphics card not with 1, but *2* GB of GDDR4 memory.

The forthcoming VFX 2000 Series card is primarily aimed at the professional workstation market and uses a modified PCB to support similar workstation-class features to that of the FireGL line.

There's no confirmation of what speeds the GPU and memory will run at yet though, but the card is set to be launched within the next few weeks. 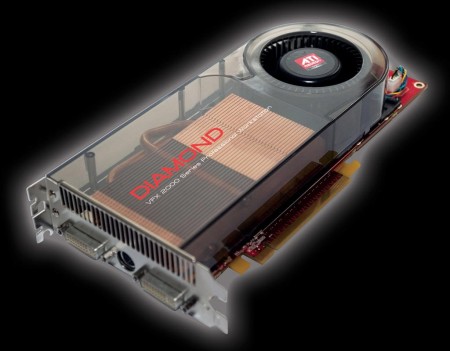 Diamond is no stranger to packin' an awful lot of RAM onto graphics cards, and apparently, the forthcoming VFX 2000 Series Professional Workstation GPU will keep the legacy alive. According to Hot Hardware, Diamond is readying a 2GB (of GDDR4 memory, no less) professional card based on the R600 (now known as the HD 2900 XT), and reportedly, "the card's PCB has been modified from the standard HD 2900 XT reference design to support the workstation-class features inherent to the FireGL line of professional graphics cards." Still, there's no word yet on what frequencies the GPU and RAM will hum along at, but word on the street has this beast launching "in the coming weeks."