Saber Interactive has delayed the new Evil Dead game until February 2022, but they're adding new features to make it worth the wait.

The new Evil Dead video game looks pretty ambitious. It's a lot like the Friday the 13th multiplayer game except with greater emphasis on PVE survival, and features characters, demons and locales from the entire Evil Dead franchise--as well as the Starz TV show. Add in the development team and online infrastructure of World War Z and the new Evil Dead game is ready for online chaos.

There's just one issue: The game has been delayed a bit to ensure higher quality. Evil Dead is also getting a groovy singleplayer mode so you can still actually play if your friends aren't online.

"We're targeting a new release date to give the team some extra time for polish and to ensure this is the ultimate Evil Dead experience you're all waiting for," Saber said. "This additional time is also allowing us to implement a single-player option that will let you enjoy the game when you are without your co-op compadres."

You'll also get a glimpse of new surprises like Cheryl Williams and Henry the Red as playable characters, plus Ash's Delta (and yes, you can drive it).

Inspired by the iconic horror, humor, and action of the "Evil Dead" universe, Evil Dead: The Game brings the biggest characters together from the franchise in an over-the-top, gore-filled experience against the forces of darkness. Work as a team of four survivors, including Ash, Kelly Maxwell, Pablo Simon Bolivar, Scotty, Lord Arthur and more, to fight Deadites, banish the vile Kandarian Demon. Or become the mighty Demon yourself, using your powers of possession to stop the good guys dead and swallow their souls!

Battle across memorable sights from the franchise, including the infamous Knowby cabin, brought to life with tons of terrifying visuals and all-new dialogue from Bruce Campbell. Discover more than 25 weapons, including Ash's Gauntlet, Boomstick, and chainsaw, and level up a variety of skill trees to grow even stronger and survive the night. 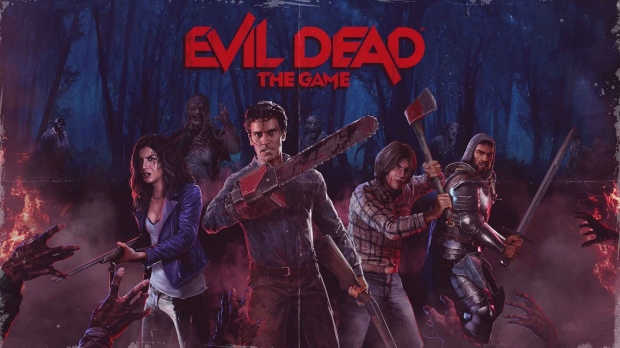