A bipedal robot named Cassie has achieved what no other robot has achieved -- successfully completing a 5K run on a single charge.

Oregon State University engineers have managed to teach Cassie to run using a deep reinforcement learning algorithm. The project is led by Agility Robotics who is attempting to combine robot controls with machine learning tools, and as a result of the engineers' efforts, we are presented with Cassie. The team of engineers said that Cassie taught itself to upright, which meant that it didn't require any tethering device to stabilize it as it ran.

Cassie ran around the Oregon State University campus for five kilometers or about 3.11 miles, and during the test, the running robot fell down twice, once due to a computer overheating and a second time when it when around a corner too fast. Cassie completed the five-kilometer run in 53 minutes, 3 seconds, and according to Jeremy Dao, a project team member, they were able to "reach the limits of the hardware and show what it can do."

Looking towards the future, robots like Cassie will be used to deliver packages, manage warehouse tasks, and eventually be able to personally assist people. For more information on this story, check out this link here. 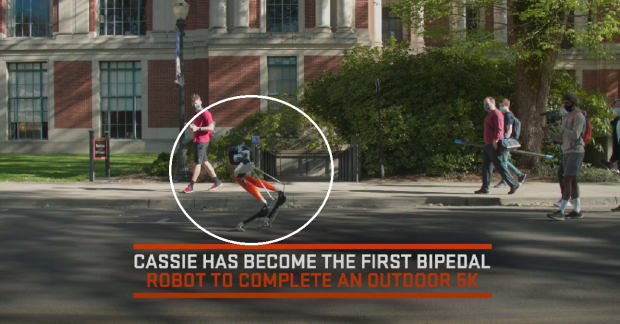