The internet saw that Elon Musk posted a cryptic message on his Twitter account and moved to decode it, looking for a hidden meaning.

Elon Musk is no stranger to creating a stir online, and the billionaire CEO has even said that he finds amusement in it - and so do many other people. One of the most recent tweets had his followers in a doozy as Musk posted a cryptic reply to a tweet from Michi Lumin that stated, "I need to start tweeting obtuse and vague things in the hopes that some people will interpret them as coded, meaningful, and mysterious. This is already happening with @BillyM2k and of course @elonmusk."

Musk simply replied by posting, "48 61 68 61 20 74 72 75 65," which caused thousands of people to begin speculating what the series of numbers translated to. Many people that replied to the thread thought that the series of numbers translated into a signal that was telling people to purchase Dogecoin. However, that wasn't the case as one user managed to crack the code, and the translation was certainly disappointing for anyone that thought it was some kind of secret message. 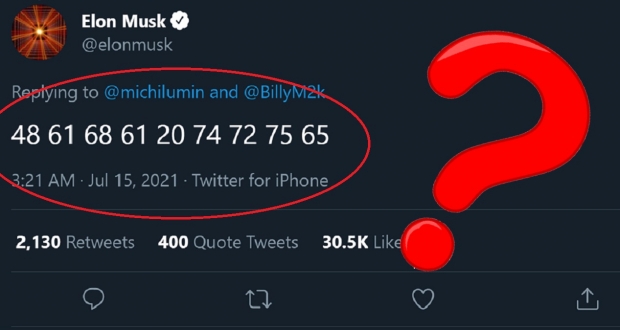