Last week, Facebook announced a plan to introduce advertisements in VR content. The idea was presented as a way for small developers to increase revenues to help reach profitability. As you might expect, the announcement drew immediate ire from VR fans which prompted the only developer involved in the plan to back out. 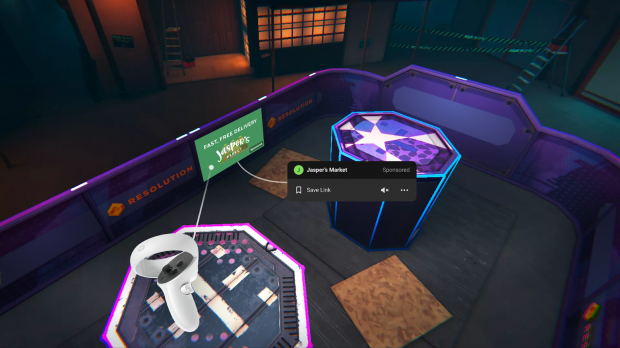 Facebook said it would implement a small-scale pilot with a select few developers to test its in-game advertising system. Multiple studios are said to be involved in the pilot, but Facebook named only one game, Blaston, in the announcement, and that didn't go well for the developer. Within a day of the announcement, Blaston's user rating got blasted with a review bomb. As a result, Resolution Games did an about-face and backed out of the plan to advertise in Blaston.

After listening to player feedback, we realize that Blaston isn't the best fit for this type of advertising test. Therefore, we no longer plan to implement the test. We look forward to seeing you in the arena and hope you try the Crackdown Update that went live today!

To make it clear, we realize that Blaston isn't the best fit for this type of advertising test. As an alternative, we are looking to see if it is feasible to move this small, temporary test to our free game, Bait! sometime in the future.

Facebook has not yet revealed any other ad participants. However, after the community reaction, any developer thinking about running ads in their game is surely rethinking that plan now.