All NewsBusiness, Financial & LegalCases, Cooling & PSUContests & GiveawaysCPU, APU & ChipsetsDealsDisplays & ProjectorsGamingMotherboardsScience, Space & RoboticsStorageVideo CardsVirtual & Augmented Reality
All ReviewsAll ArticlesAudio, Sound & SpeakersCases, Cooling & PSUCPUs, Chipsets & SoCsComputer SystemsDisplays & ProjectorsGamingMotherboardsNetworkingPeripheralsStorageVideo Cards
GuidesGamingAsk the ExpertsNewsletterAboutForums
Chia Coin MiningRTX 3090RTX 3080RTX 3070HDMI 2.1Bitcoin MiningBattlefield 6
Audio, Sound & Speakers
The day has come that you never expected would arrive, someone has been made enough to build a dual tape deck that connects to a USB port. Ion Audio, the company behind the USB record deck came up with the idea to make a tape deck, since its USB connected record player has been a huge hit.

The imaginatively named Tape2PC comes with MixMeister's EZ Tape Converter which does the dull stuff for you and sticks your recordings into iTunes. Aparently the Tape2PC doesn't even need any drives to work, it's all plug and play and off you go. 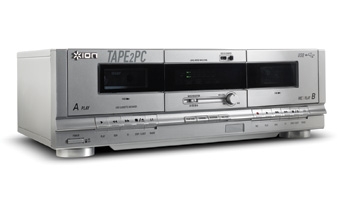 For those of you not old enough to remember cassette tapes, you might not understand the importance of the Metal and CrO2 tape selector, but it's an important high-end feature for tapes, at least if you bought the expensive kind. With dual tape players you can even dub your tapes.

Although the idea here is to "rip" your tapes and turn them into MP3's or possibly burn them onto CD, but the Tape2PC can also be used as a traditional tape deck as it has stereo RCA outputs which can be connected to an amplifier. The Tape2PC works with Mac's as well, but then you have to use the supplied Audacity software instead of the EZ Tape Converter, as the latter only works with PCs.

The Tape2PC is expected to retail for around 99, which is about US$200, which seems like a waste of money to us, but if you have a lot of tapes around, but nothing to play them on, this might be just what you've been waiting for.