Ubisoft is tacking an extra week onto Assassin's Creed Valhalla update times in an effort to add more polish and quality to post-launch content. 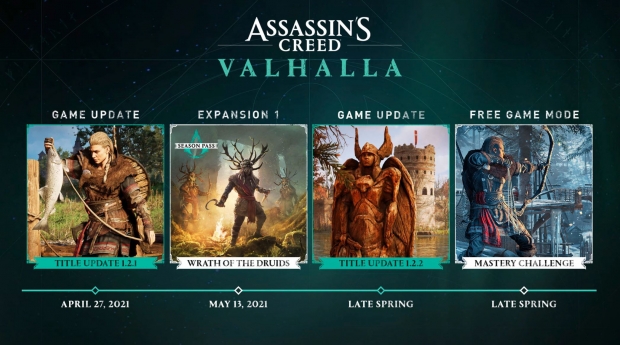 Ubisoft is taking criticism to heart and now plans to slow down Assassin's Creed Valhalla content updates to give more time on each seasonal event. The most recent Ostara Festival event was met with frustration from gamers, and Ubisoft is listening. Instead of rolling out a new title update every 4 weeks, Ubisoft will release new content every 5 weeks. The idea is to give developers extra time to craft seasonal events and rewards to keep players engaged with the product well after release.

"We recognize that some of our recent title updates may not have met your expectations or been up to our standards,"Ubisoft said in a recent blog post.

"We have made several changes to production pipelines and tools so that we can deliver more robust updates, which we will cover later. We are also shifting from a 4-week to a 5-week Title Update release cycle to allow for more thorough testing and refinement."

The next 1.2.1 title update drops tomorrow, April 27, and should revolve around fishing-based challenges. Valhalla's first major expansion, Wrath of the Druids, follows on May 13 and will take place in Ireland and tell the tale of St. Patrick (among others).