All NewsBusiness, Financial & LegalCases, Cooling & PSUContests & GiveawaysCPU, APU & ChipsetsDealsDisplays & ProjectorsGamingMotherboardsScience, Space & RoboticsStorageVideo CardsVirtual & Augmented Reality
All ReviewsAll ArticlesAudio, Sound & SpeakersCases, Cooling & PSUCPUs, Chipsets & SoCsComputer SystemsDisplays & ProjectorsGamingMotherboardsNetworkingPeripheralsStorageVideo Cards
GuidesGamingAsk the ExpertsNewsletterAboutForums
Chia Coin MiningRTX 3090RTX 3080RTX 3070HDMI 2.1Bitcoin MiningBattlefield 6
Peripherals
Logitech launched its latest notebook mouse today, the VX Nano, which is smaller than the VX Revolution. The great news for lefties is that the VX Nano is largely ambidextrous, although the two "side buttons" that are located on the top left hand side are still going to be in the same position as for a right handed user.

It features the same laser technology as the VX and MX Revolution and it also has the same excellent MicroGear scroll wheel and this time you only have to press and hold it to change mode, rather than moving a switch at the bottom as you do with the VX Revolution. It also has a built in battery indicator and it's powered by two AAA batteries which should give about 6 months battery life. Logitech also supplies a protective carry pouch with it. 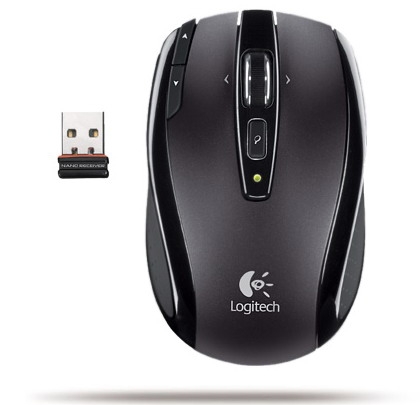 But what really sets the VX Nano apart is the tiny USB receiver it comes with, hardly bigger than the USB connector itself. You can leave it plugged into your notebook and you won't even notice that it's there as it only protrudes 8mm. The VX Nano is using 2.4GHz technology as all other current cordless mice from Logitech.

The price remains the same as the VX Revolution, US$79.99, which is quite pricey for a notebook mouse, but the predecessor was excellent and we'd expect the VX Nano to be just as good.