Though i'll leave this post up, as I think such a cool mouse is worth a double mention.

Logitech being the rather innovative mob that they are, have cooked up something very unique and interesting in the way of an entirely new form of mouse.

Dubbed the "MX Air Rechargeable Cordless Air Mouse", this thing not only works in the same manner as a normal mouse (using a surface), but if you hold it up in the air and move it around it'll work just as well!

"How the hell?" I hear you all say. Embedded is Logitech's new Freespace motion sensing system, this allows you to treat the mouse as a remote control from up to 30 feet away using 2.4GHz wireless technology. You can set up different types of hand movements to control various aspects of the system such as volume, pause, fast forward etc. - Perfect in a HTPC environment.

Also done away with on this funky new mouse is the traditional scroll wheel system. Instead there is a touch-sensitive control panel which features inertial scrolling by just lightly swiping the surface at your desired speed / direction.

The mouse will hit shelves sometime next month with list pricing set at $149 USD.

For further information on it, check out the press material on Logitech's website. 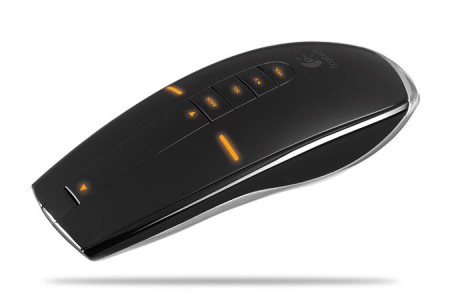 FREMONT, Calif. - July 12, 2007 - The future of PC navigation starts now. Logitech (SWX: LOGN) (NASDAQ: LOGI), the world's leading manufacturer of computer mice, today introduced the Logitech® MX Air™ Rechargeable Cordless Air Mouse, a versatile laser mouse that works on the desk and in the air. Similar to the way people use a remote to control a television, when holding the MX Air mouse, people can now lean back and relax while navigating the computer and enjoying media content.

For many, the computer is now much more than a productivity tool. It serves as a hub for digital media, demanding a new way for people to control, consume and enjoy music, photos and videos on the PC. To enable effortless in-air navigation, the new mouse combines three important technologies - Freespace™ motion-control, gesture command and wireless - so people can point, select and play media files with just a flick of the wrist.