Axiom Verge 2 is only timed exclusive to Epic Games Store, and Thomas Happ reveals why he signed the exclusivity deal with Epic. 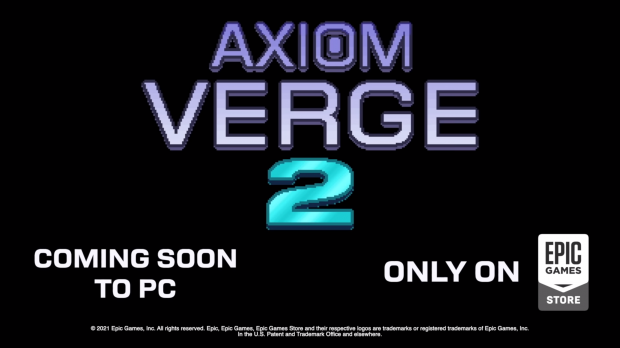 Steam gamers will have to wait some time before playing Axiom Verge 2. The sequel is timed exclusive to the Epic Games Store and won't be available on Steam at launch. We don't know how long the roguelike will be held off of Steam, but the typical deals are around 6 months to 1 year.

In a recent blog post, Axiom Verge 2 developer Thomas Happ explained why he chose to team up with Epic Games, and explains that Valve is very supportive of the decision.

"For Steam fans out there, please know that it will be coming your way eventually. The Steam team at Valve has also been incredibly supportive of Axiom Verge, and my decision to partner with Epic on this is in no way a comment on my relationship with Valve," Happ said.

Happ says the 88% - 12% revenue split is a big motivator, and Epic has helped relieve some of the titanic stresses of simultaneously developing a new game while supporting a family.

"I don't want to go into too many details about the nature of the arrangement I have with Epic other than to say that I've been able to put my stress about how the game will perform out of my mind for a bit and just focus on making the game I want to make. Making games can be fun, but it can also be stressful. With this deal in place, game development started feeling like a hobby again."

Axiom Verge 2 is due out sometime in 2021, and will be released on PC via the Epic Games Store and on Nintendo Switch. PlayStation and Xbox versions are also coming too.