In the last week, GameStop's stock has spiked by 671% and is now trading at $301.95 due to stock market fluctuations from short-sellers. Now the United States government is stepping in and is scrutinizing things very closely. 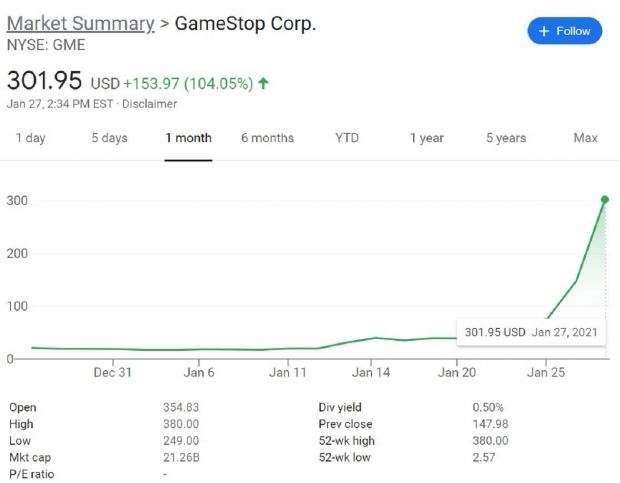 GameStop stock is under a tremendous short squeeze, a phenomenon that occurs frequently in the stock market. Here's how it works: Buyers borrow a stock (in this case, GameStop) they don't yet own in a deal called a short sale. These traders borrow the stock at a set price and sell it, ideally at a higher price than they bought it. but they must also buy it back and return it at a later date (unless, of course, the company goes bankrupt). These kinds of traders are called short-sellers. The thinking here is the traders expect the stock to fall in price, so they will potentially pocket the difference between the initial borrowing price and the lower future price at which they buy it back.

It can be a risky bet. If the stock goes up, you lose money as a short-seller.

The short squeeze occurs when a stock raises in price and short-sellers are trying to buy back stock as quick as possible to help mitigate losses. The higher the stock raises, the more money the short-sellers will owe when they eventually buy back the stock. This can massively inflate the stock value even more--which is exactly what's happening with GameStop.

It's not that trades expect GameStop to succeed. It's quite the contrary; everyone expects it to fail, especially the day traders of r/wallstreetbets. The Redditors put out lots of posts saying they were buying up GameStop stock, which caused the price to go. And it's going up because the short-sale interest has gone up.

At the time of writing, short-sale interest in GameStop stock sits at 68.13 million, outstripping the 67.9 million outstanding GameStop shares. More people are interested in short-selling GameStop stock than there are shares available, which is skyrocketing the price.