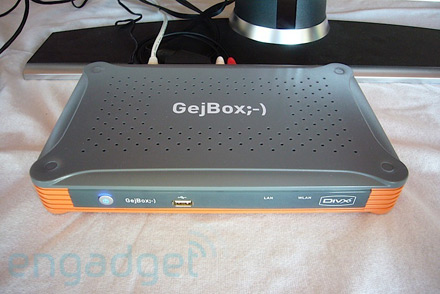 So far whats known is that they are working on producing a dedicated hardware device for streaming media, this dubbed the "GejBox;-)". Engadget have posted up some pictures and info on it here, but they also comment that it's most probable this device wont actually hit the market (at least in its current form).

Looks like we were right about DivX developing some hardware: say hi to the DivX GejBox (no, we're not spelling that GejBox;-), sorry guys). Basically this thing is a media streaming beta box to test out DivX's new connected hardware platform initiative, so it's safe to say that while a select few beta testers will get to play around with a GejBox, this device will most likely never make it to market -- at least not in its current form. (DivX is really trying to get harware-makers to pick up their platform, we don't think they want to be in the box business.) Still, it does have some interesting features, like S/PDIF, and HDMI, and because the platform is intended to be incredibly extensible, not only do you have the requisite home network video / picture / audio streaming, but it's also got support for live DivX Stage 6 high-def internet video streaming, and even a Google Video plugin not too different from the YouTube Apple TV plugin we saw debuted at D. Check out the pictures!