Kat VR is gearing up to release Loco S, the second-generation of its wearable VR locomotion sensors, and you can pre-order them now.

Kat VR is no stranger to the VR locomotion game. The company started off making omnidirectional treadmills for the VR arcade industry and VR enthusiasts. It now offers a handful of products for gamers and professionals alike.

Kat VR Loco S is an updated version of the original Kat VR Loco sensors, which allows you to control your movement in VR games by walking in place. The kit includes three sensors that you attach to your body; one for each foot, and one for your waist, which tracks your movements relative to a basestation receiver.

With Kat VR Loco S, you can run in place to move forward. The pace of your steps regulates the speed of your in-game movement. The Loco S sensors also support walking backwards by putting one foot behind you and strafing side to side by holding your foot out beside you.

Kat VR Loco S is a wireless solution, and it supports almost every headset, including PSVR, HTC Vive, Vive Index, Pimax, Oculus Rift and Quest, and Windows Mixed Reality. Compatibility with HP's Reverb G2 is still in testing, but that's a Windows MR headset, so it should work too.

Kat VR is currently taking pre-orders for the Loco S locomotion system, and the company expects to deliver the kits in December. The standard price is $229, but if you pre-order before November 27, you can save yourself 20% and grab the set for $183. 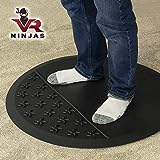