Crytek hyped up but didn't really seem to hit any memorable home-run from Crysis Remastered, but the developer isn't just sitting on its hands right now. 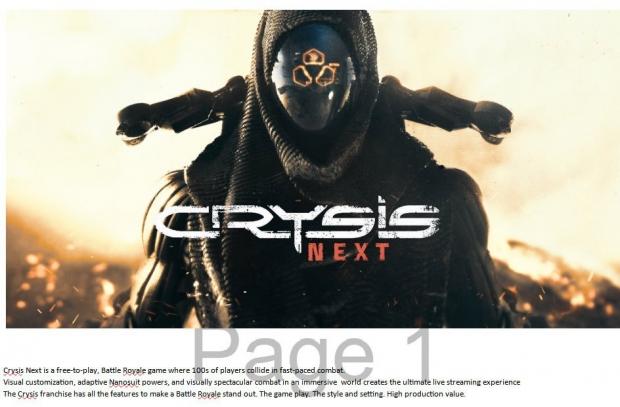 According to a new job listing on the official Crytek website, they're hiring new staff for a new AAA game that is currently in-development. One of the new games is Crysis Next, which has been teased as a next-gen "free-to-play Battle Royale game where 100s of players collide in the fast-paced combat".

The job description teases: "Crysis Next is a free-to-play Battle Royale game where 100s of players collide in the fast-paced combat. Visual customisation, adaptive Nanosuit powers and visually spectacular combat in an immersive world create the ultimate live streaming experience".

"The Crysis franchise has all the features to make a Battle Royale standout. The gameplay. The style and setting. High production value".

I was hoping Crysis Next was going to be a huge new Crysis game built from the ground up for next-gen PC hardware and next-gen consoles, but I guess not. Hopefully this changes soon and we see a full reboot of Crysis with a totally next-gen engine, physics, and more.

There's so much that could be done with all the new PC tech with 16-core/32-thread CPUs at up to 5GHz with the AMD Ryzen 9 5950X processor, PCIe 4.0 storage @ 7GB/sec, and next-gen Ampere and RDNA 2 graphics cards from NVIDIA and AMD. The next-gen consoles have near equal hardware, so it wouldn't be watered down for consoles -- make it exclusive to the PC and next-gen consoles, easy.

I mean, come on Crytek -- we're begging for it.

Other games teased in Crytek's new job posting are: