Xbox All Access can save you money in the long run, but only if you plan to buy Xbox Game Pass Ultimate anyway. 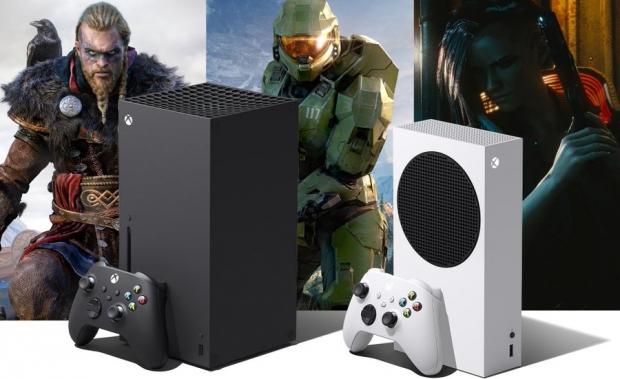 Microsoft's Xbox All Access program opens new flexible access points for consumers who don't have $499 or $299 to drop on a new Xbox. All Access allows consumers to sign a credit lease contract and pay for a next-gen Xbox Series X or Series S console over time.

Instead of paying hundreds all at once, consumers pay in monthly installments across a 24 month term.

We've crunched some numbers to see if Xbox All Access is actually worth it or not. There's a lot of variables, but the short answer is yes, it's worth it for the Series S if you can get the best possible rate and plan to buy Game Pass Ultimate anyway. And, of course, if you're okay with being locked into a digital-only console. 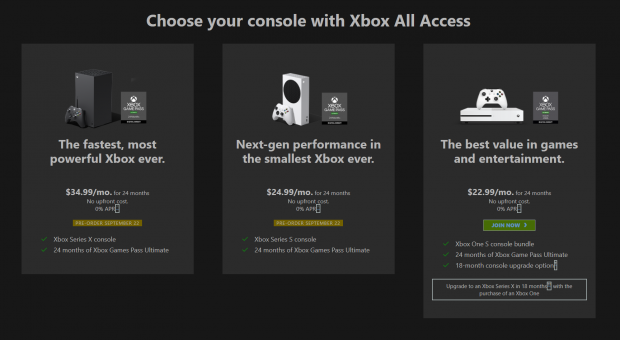 The financing is through Citizens One, and here are the terms.

On paper, Xbox All Access sounds great. There's 0% Annual Percentage Rate, no money down, no late fee penalties. There's a minimum payment, and as we mentioned above, it'll vary from person to person depending on their individual credit. You have to apply in-store at retailers like Walmart, Target, Best Buy, GameStop, and the Microsoft Store.

Some important things to remember:

Now that we've gotten that out of the way, let's talk about whether or not Xbox All Access is worth doing. 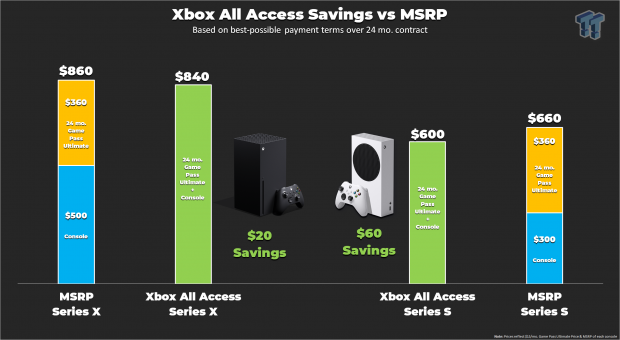 To figure this out, we did some quick calculations based on the best possible month-by-month payment terms. Included are MSRP rates for the Xbox Series S ($299) and Xbox Series X ($499) as well as the month-by-month cost of Xbox Game Pass Ultimate ($15 a month, $180 a year, $360 every 2 years).

Here are our findings:

With the best possible terms at $25/mo. for 24 months, the Xbox Series S will cost $660 with 2 years of Game Pass Ultimate. That's a $60 savings over MSRP if you bought the Series S and Game Pass subscriptions separately. Conversely, Xbox All Access is $300 over the base MSRP of an Xbox Series S.

Whether or not Xbox All Access is worth it comes down to three things: Is it feasible for your credit? Do you need to make flexible payments instead of a lump sum? And finally, how much do you care about Xbox Game Pass Ultimate?

Based on the tremendous value the service offers, Microsoft is clearly positioning the service as the be-all end-all experience on the platform.

This program was specifically made to lock you into an ecosystem where you make systemic payments, and therefore are less likely to deter from that platform--incremental payments ensure long-term investment, which is what Microsoft cares about most--and a direct route to Game Pass, a service that features tons of online-driven monetized games.

All of this is by careful design and this is just the beginning of Microsoft's evolved push. Things will really gear up with Project xCloud.