Diablo and Diablo II have some of the most addictive loot-finding in any game ever made. This was by design, and fed the core gameplay loop from day one.

In a recent interview with Ars Technica, original Diablo designer David Brevik talked about the game's legendary RNG randomization and how it was designed to keep gamers playing. Diablo was always built from the ground up with two simple ideas: Instant action, and tons of loot. The loot idea was based around old PC games like Moria, but on a deeper and more robust level. Diablo set the bar for ARPG loot systems, which basically turned every single enemy into a walking slot machine, and Diablo II kicked things up a notch.

"For Diablo, there was a lot of technical things we had to overcome for things that were different than games at the time," Brevik said.

"The loot lottery is kind of a system by which randomizers are generated. The best analogy is it's a slot machine. Every time you kill a monster you put a quarter into the slot machine and pull the lever and out could come nothing, you could get your quarter back, or you could hit a jackpot.

"So if you could think of pulling the levers every time you kill a monster it's got kind of this addictive quality--just like slot machines are addictive, so is the 'I am gong to maybe win something big here.' 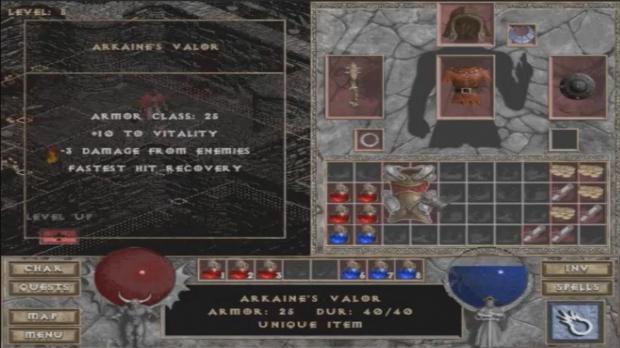 "It was kind of loosely based on the system that came from Moria, those kinds of games. They had random item generation but not to the same extent that we did in Diablo.

"Luckily this was a really fun part of the game for a lot of us, so we didn't mind working on this part. It meant that we got to play the game and get cool stuff. "

Brevik says that Diablo was inspired by his early D&D campaigns which were focused less on character creation and more on getting those sweet vorpal blades.

We're still waiting to hear if Diablo II remastered is officially happening or not.