The PlayStation 5's SSD is set to destroy loading speeds this holiday, but the devs at Sucker Punch are finding new ways to massively speed up loading on the PS4's old mechanical HDD. 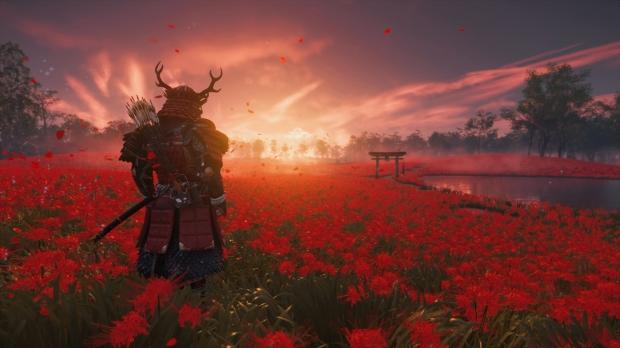 Compared to most open-world games on PS4, Ghost of Tsushima has some pretty fast loading times. Whether gamers are respawning from death or fast-travelling, Sucker Punch's new samurai adventure takes roughly 8-10 seconds to load sequences, and sometimes even less than that. This speedy loading is made possible by the team's storage and engine optimizations, which significantly reduce seek times on the HDD.

As Mark Cerny explained in March, mechanical hard drives like the one used in the PS4 spend 2/3rds of their time seeking rather than actually loading data. So developers are forced to work around these limitations, and Sucker Punch's art team found a unique way to massively shrink and compress assets to adhere to the strict memory budgets.

"Our art teams did an amazing job pushing their assets to fit in our aggressive performance and memory budgets.They accomplished a huge amount especially considering the size of our team. As an example, one of our 200m x 200m terrain tiles only usually takes up around 2MB (compressed) on disc, including all the terrain and foliage placements. It's easier to load a lot of data when you keep it compact," Ghost of Tsushima's lead engine programmer Adrian Bentley told Kotaku.

"Our mesh and texturing systems are very fine-grain and fairly conservative.We only have one copy of every asset on the disc. During most loads, when not jumping into a close-up, we only load newly required assets and can dial down our streaming density a bit.

"This usually results in requesting one or maybe two fewer mipmap levels for big textures. Users shouldn't see pops because we still have the texture data we need to render when jumping into gameplay 99% of the time."

Bentley says he's excited to see what the team can do going forward, so we could see some massive optimizations on Sony's next-gen PlayStation 5. Ghost of Tsushima could have ultra-fast loading times thanks to the console's unique 12-channel PCIe 4.0 SSD tech.