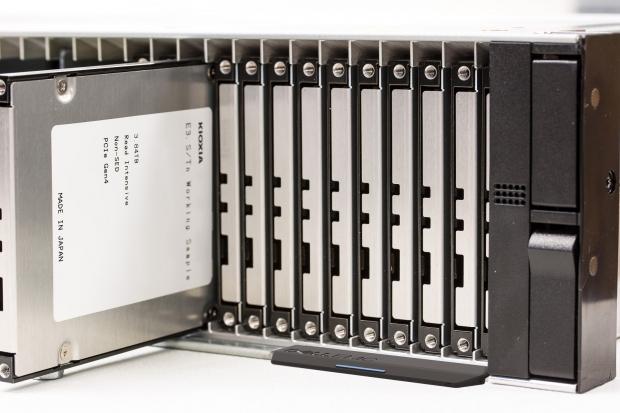 Enterprise and Datacenter SSD Form Factor, or EDSFF (and also known as E3 -- not to be confused with the gaming-focused E3 event) is designed to maximize system density, efficiency, and simplicity. KIOXIA itself is a member of the SNIA SFF-TA-1008 technical work group which is working on the new storage form factors.

EDSFF E3.Short (E3.S) and E3.Long (E3.L) solutions are the future of SSD storage for not just servers, but All Flash Arrays (AFAs) in cloud and enterprise datacenters.

What makes things easier is that the new EDSFF uses the same form factor for PCIe -- so PCIe-based devices like NVMe SSDs, GPUs, and NICs (network interface cards) makes it the next step in enterprise and datacenter upgrades.

Better yet, the EDSFF E3.x drives demolish the previous 2.5-inch form factor, offering a huge 40W of power and better signal integrity that drives huge performance that PCIe 5.0 (and beyond) can provide. This provides a huge future proofing on the standard, making it another easy choice for enterprise and datacenter customers.

The company continues: "The drive features the same core components as the recently announced CM6 Series PCIe 4.0 NVMe 1.4 SSD and is configured with x8 lanes and up to 28W of power. Additional E3 size and width options will also be supported, including E3.S thick (16.8mm) and E3.L thin".

Shigenori Yanagi, Technology Executive, SSD at KIOXIA Corporation said: "We are excited to work with the world's leading server and storage system developers to bring new classes of systems to market that will be able to fully unleash the power of flash memory, NVMe and PCIe".

He added: "EDSFF E3.S will power the future generations of servers and storage, making the data center even more efficient".