Mars is commonly known as the Red Planet, and that is due to the iron oxide prevalent on Mars' surface, which gives it that red tinge. 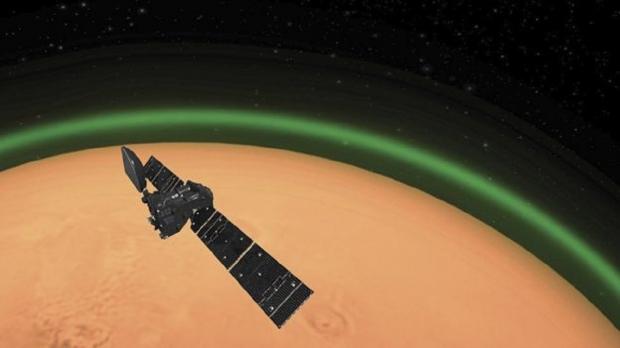 Now, astronomers have spotted the Red Planet having an outer glow of green. In a new paper published in the journal Nature Astronomy, it's detailed the Trace Gas Orbiter (TGO) has observed the atmosphere of Mars and has observed a green glow. This green glow is a result of Sunlight charging oxygen atoms in the atmosphere of Mars. When oxygen atoms are charged to higher energy levels, they eventually fall back to their resting state, and as a result of that transition, a green glow is produced.

The paper details that the altitude of these charged oxygen particles are anywhere between 80km and 120km, depending on the pressure of CO2. Dr. Manish Patel, co-author of the study said, "By looking at the altitudes of where this emission is, you can actually tell the thickness of the atmosphere and how it's varying. So, if you were to keep observing this phenomenon, you could see the height of the atmosphere change, something it does for example when it heats up during dust storms. This is an issue we face when we try to land on Mars because we're never quite sure just how thick the atmosphere will be when we plough through it to get to the surface."

This observation of Mars could become critical information for eventually sending humans to the Red Planet. As Patel explains, by observing this phenomenon, we can figure out the thickness of the atmosphere, which is vital information for when NASA/SpaceX attempts landing a spacecraft on Mars. Space agencies will want to know the thinnest part of the atmosphere, and at what time that part of the atmosphere is thin. They will want to know this so they can have a clean landing on the Red Planet, and not encounter atmosphere thickness that could jeopardize the mission.