A black hole that is located 600 million light-years from Earth has been rediscovered to have a regular "heartbeat".

The new findings were discovered by researchers from the National Astronomical Observatories, Chinese Academy of Sciences, China, as well as researchers from Durham University, UK. The report was published in the journal Monthly Notices of the Royal Astronomical Society, and details a black hole that was first detected to have a "heartbeat" back in 2007. Since then, astronomers haven't been able to pick up a signal from the black hole as our Sun was blocking it out.

Now, researchers used the European Space Agency's XMM-Newton X-ray satellite, and have confirmed that the black hole is still beating like a heart. So why does this black hole beat like a heart? According to Professor Chris Done, in Durham University's Centre for Extragalactic Astronomy, who collaborated on the research, "The main idea for how this heartbeat is formed is that the inner parts of the accretion disc are expanding and contracting." Done also said, "The only other system we know which seems to do the same thing is a 100,000 times smaller stellar-mass black hole in our Milky Way, fed by a binary companion star, with correspondingly smaller luminosities and timescales." 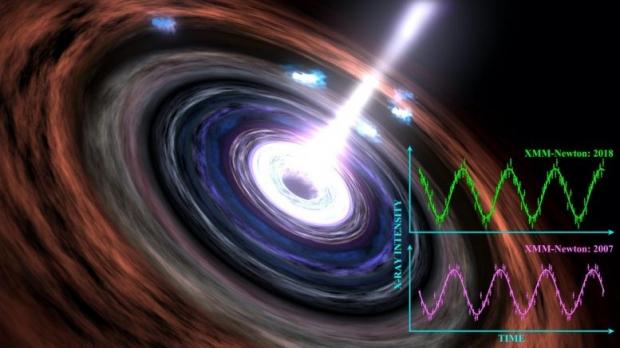 On top of that, Done also stated, "This shows us that simple scalings with black hole mass work even for the rarest types of behavior." The time between each of the beats allows for researchers to determine the size and structure of the matter close to the black hole's event horizon.

If you are interested in reading more into this discovery, check out this link here.