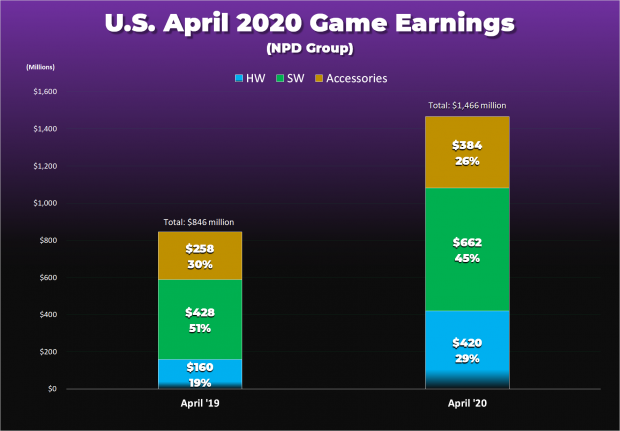 Today the NPD Group delivered its April 2020 games report, and the results are mind-boggling. US spending on games reached a historic high of $1.46 billion, up 73% year-over-year and become the best-performing April month in the country's history. 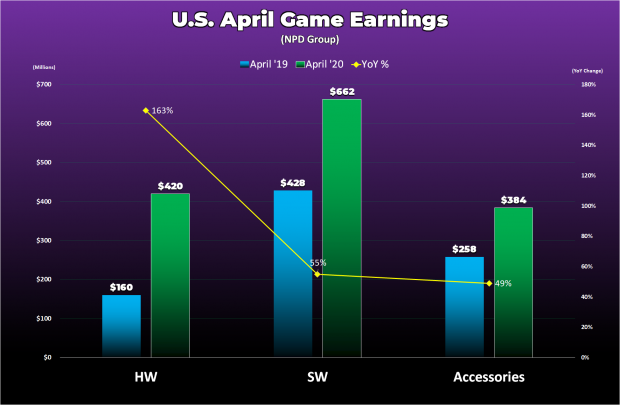 Hardware rose by an astronomical 163% to $420 million and boosted April '20 as the highest-earning HW sales month since April '08. The huge spike was driven primarily by Nintendo Switch sales, but PS4 and Xbox One sales were also up 160% YoY. NPD Group's Mat Piscatella notes that the Switch is now the best-selling console of all time in the U.S. year-to-date, overshadowing Nintendo's legendary Wii console.

Software is up 55% to $662 million, driven by massive heavy-hitters like Animal Crossing, Final Fantasy 7 Remake, and catalog games like Modern Warfare and GTA V. April 2020 likewise set a new monthly record for software sales in the U.S.

Final Fantasy 7 Remake was the best-selling game of April 2020 and is now the biggest U.S. sales debut for the franchise's history. It's worth noting that digital sales of Animal Crossing: New Horizons weren't tracked in the data.

Other interesting tidbits: Two Call of Duty games sit on the top-10 list, and three Take-Two games are in the best-sellers, including GTA V.