"In regards to running into any issues, there wasn't any I could think of. I was using glitch building techniques to get the desired effect for certain parts of the build, as well as using my own creative juices. I have always been a fan of China Town as I live in London and would visit Soho a few times a year to go to favourite Chinese restaurant, so thought to myself 'let me try and build it,'" the creator said. 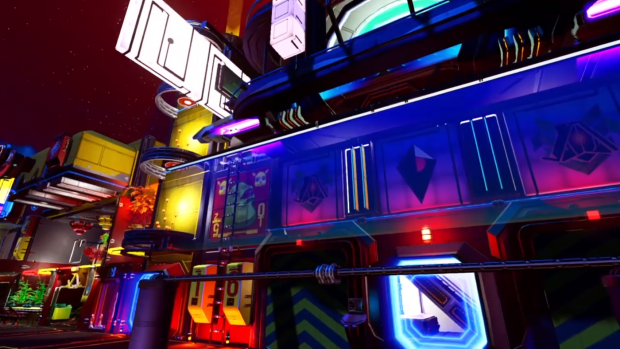 Hello Games also removed the build cap with the latest EXO update. This has huge implications for the community and has already led to other crazy builds like a giant scorpion that resembles the spider in Wild Wild West.

The creator says No Man's Sky and it's base-building community is in a great spot right now.

"I guess in a sense of creating something realistic to the real-life China Town could be considered an issue, but having such great base building tools provided by Hello Games we have a great variety of methods to create replica recreations of real-world builds.

"There are such a great group of specific Base-Builders out there who have created amazing structures/builds that have honestly blown my mind, and in-turn have inspired me to be creative with base-building. I think since glitch-building was first discovered, I believe in 2017, it has evolved with each No Man's Sky update, and there has been more discoveries and methods found to enhance the base-building experience.

"I would most definitely say that base-building is in a very healthy state right now. It's great to be part of such a positive community who in my opinion, are the best gaming community around, and long may it continue."

Hello Games recently teased big things coming to No Man's Sky in the future, and to date the game has released 10 free content updates that've dramatically changed the game since its 2016 release.