Admit it: you either use, or know someone who has been binging TV shows and movies on Netflix while on stay-at-home lockdowns and quarantines over COVID-19 coronavirus.

Netflix has now announced its Q1 2020 results, where the streaming giant revealed it experienced its biggest quarter ever. The company reeled in another 15.77 million subscribers in the last 3 months, blowing away analyst expectations of 8.22 million -- nearly double that amount.

But bigger than that is Netflix market capitalization, which breached $190 billion -- meaning Netflix is now bigger than Disney. Yeah, let that sink in for a minute. Even with Disney owning what feels like virtually everything in Hollywood between Pixar, Lucasfilm, Marvel and many others -- Netflix is a beast.

When you consider Netflix unleashed anticipated shows like The Witcher, and the mega-successful and very random Tiger Kings -- which has been the most popular docuseries on Netflix with a staggering 64 million households binge watching it in the first 4 weeks -- have come out in Q1 2020 mixed in with tens of millions of people stuck at home, these numbers are still a surprise. 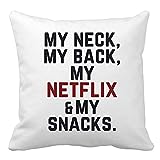