AMD is hard at work on its new Big Navi GPU, and now we have a fresh new rumor that is very exciting -- as it teases some truly monster specs that could really shake up the camp at Team Green, at least until Ampere is here. 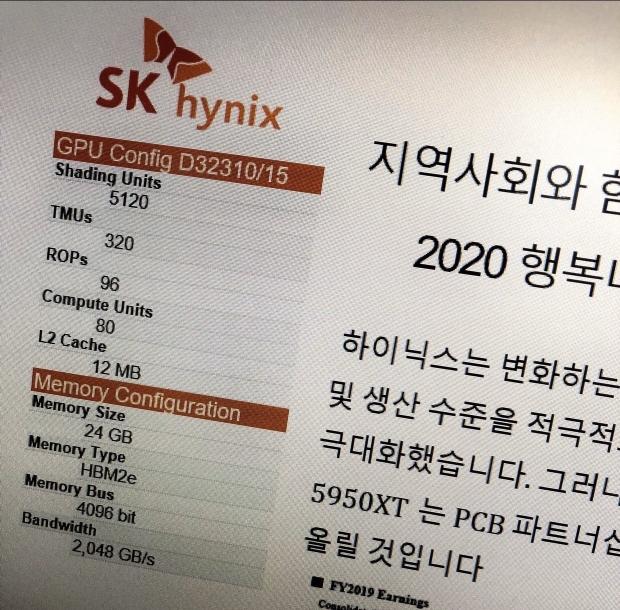 The new report is coming from 'CyberPunkCat' on Twitter that reportedly has sources at SK Hynix that have provided him with an information sheet on the specifications of Big Navi -- including an insane 24GB of HBM2e memory that has an even-more-insane 2GB/sec+ of memory bandwidth.

We know that AMD is preparing Big Navi behind the scenes, and that they want their new enthusiast graphics card to do to NVIDIA with 4K gaming what Ryzen did to Intel in the CPU market. In a recent press briefing with AMD's Radeon Product Management Lead, Mithun Chandrasekhar, we found out some info on Big Navi.

He said: "With the Radeon 5000-series we are essentially covering 90-something-percent of the total PC gamers today. And so that's the reason why no 4K right now, it's because the vast majority of them are at 1440p and 1080p. That doesn't mean a 4K-capable GPU isn't coming, it is coming, but for here and now we want to focus on the vast majority of gamers. Similar to Ryzen. All of us need a thriving Radeon GPU ecosystem. So, are we going after 4K, and going to similarly disrupt 4K? Absolutely, you can count on that. But that's all I can say right now".

We also know that NVIDIA has its new Ampere GPU architecture in the oven right now, and should be ready for its big debut at the GPU Technology Conference (GTC) being held in San Jose, between March 22-26. I will be there on the ground providing coverage from GTC where we should see Ampere-based Quadro RTX graphics cards revealed.

NVIDIA will be launching its new GeForce RTX 3080 and GeForce RTX 3070 graphics cards later in the year, with my sources telling me the current coronavirus issues are going to halt the launch. Manufacturing, shipping, and everything in between is affected which means gamers will be waiting longer for new GPUs unfortunately.

Still, what we have here with the Big Navi GPU specs is tasty, and I want to see it in action.