So, Google has just kinda spoiled its Pixel 5 unveiling party -- by confirming it in public, kinda. Google's next-gen Pixel 5 smartphone has appeared on the Android Open Source Project, or AOSP. 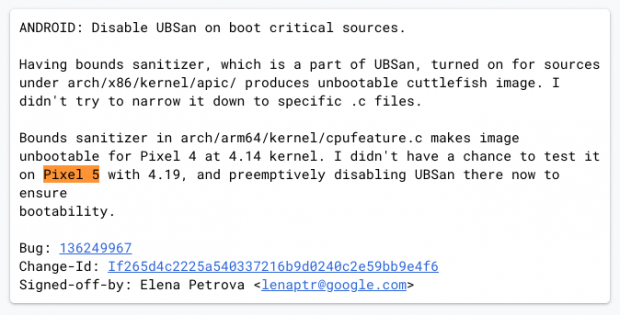 9to5Google reports that there's "potential confirmation from AOSP code comments that Google's next mainline Pixel phone will, unsurprisingly, bear the name "Pixel 5." The confirmation comes from a new code change for Android's Linux kernel, which the AOSP developer explains has only been tested on the Pixel 4 and not the Pixel 5".

Since the story went live, theree has been some sneaky last-minute code changes which has replaced "on a Pixel 5 with 4.19" with "on an arm64 device with 4.19". Too late though, Google... too late. We should expect Google to unveil its next-gen Pixel 5 and Pixel 5 XL smartphones at its annual Google I/O developer conference in June, just after Computex 2020.