The significance of The Hubble Space Telescope cannot be overemphasized, so in an effort to honor the telescopes numerous discoveries, the United States Mint might issue a 2020 coin dedicated to it. 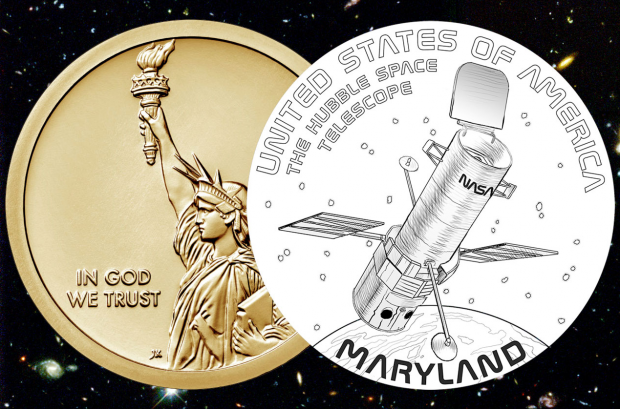 The Mint's American Innovation $1 Coin Program, which was introduced in 2018, aims at honoring significant innovations and innovators by releasing new coins dedicated to the achievements. The program is a multi-year effort that will see the release of one-dollar coins representing each of the 50 U.S states and their specific achievements. In this instance, The Hubble Telescope will represent the state of Maryland.

April Stafford, director of the U.S. Mint's Office of Design Management, said at a Citizens Coinage Advisory Committee (CCAC) meeting, "I love the dichotomy within this portfolio. We have one set of designs that look microscopically inside us and then another that looks way outside and into the universe." The committee favored the design of Hubble orbiting Earth (seen above) as it depicts the telescope doing what it does best, observing distant stars. If you are interested in reading more on this, check out this article here.