Microsoft has been embracing PC in a big way, complete with Xbox Game Pass integration and simultaneous game launches on the platform. But Project xCloud is coming to PC too, and aims to essentially do what Stadia does for Chome browsers. 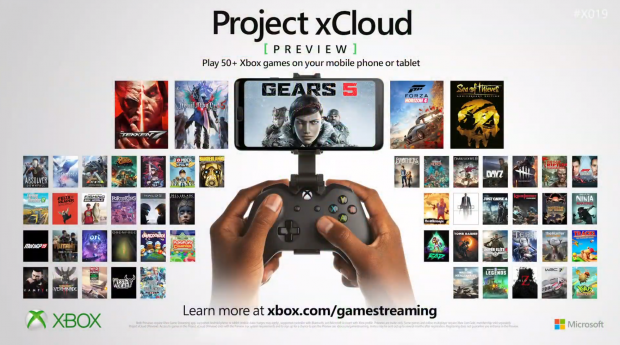 In 2020, Project xCloud will stream games to PCs, solidifying Microsoft's strong synergy of hardware and services. "We've heard your feedback loud and clear. You want more ways to play. We are delighted to announce that in 2020 we will bring Project xCloud to Windows 10 PCs," said Catherine Gluckstein, GM of product engineering and strategy at Project xCloud.

And there's a potential tease for Project xCloud coming to competing devices, too. Maybe Nintendo Switch? "And of course we won't stop there. We're working with lots of partners to bring Project xCloud to every device you want to play."

The company seems to have all the streaming bases covered. Gamers have two options with streaming: They can turn their Xbox One S or Xbox One X into a remote streaming station that beams games to wireless devices (or maybe PCs) for free, or they can pay a monthly fee to use Project xCloud to do the same. All that's missing is a low-cost streaming-only box to hook up to a TV that receives Project xCloud signals, similar to the Chromecast Ultra for Stadia.

In a noticable jab at Sony, Microsoft confirmed Project xCloud will support DualShock 4 controllers. This includes both on-the-go streaming to mobile devices as well as desktop PCs.

Microsoft is set on global domination with their new streaming service. Project xCloud's testing will extend to Canada, Western Europe, Japan, and India in 2020.

The idea with Project xCloud's PC streaming is simple. Microsoft wants to let consumers play Xbox games without having to own an expensive gaming PC. Microsoft's servers handle all the raw graphics processing power and transmit the gameplay right to your PC over the internet, similar to Stadia.

Right now Project xCloud is only in preview stages, and we don't know just how much the service will cost on a month-to-month basis. The preview currently has over 50 games with heavy-hitting favorites like Halo 5, Gears of War, and Tekken 7.

The following games were just added to Project xCloud's preview: