Some PC players have taken to community forums to report that Red Dead Redemption 2 is having back-to-back crashes.

According to the /r/reddeadredemption subreddit and one of GameSpot's editors, one of the most common errors that PC players are experiencing is "Red Dead Redemption 2 exited unexpectedly. Please click Retry below to enter the game again, or click Safe Mode to launch the game with reduced graphics settings. If you continue to have problems playing the game, please contact Rockstar Games Customer Service at https://support.rockstargames.com ." You can see from the below image the options given after this error message is received.

Rockstar Games have taken to their official 'Rockstar Support' Twitter account to say that players must have the most up to date drivers when attempting to launch Red Dead Redemption 2 on PC. They also link to an article detailing how players can get their drivers up to date. At the moment, it's unclear whether or not this is a driver issue as players have commented on the Twitter post claiming they have updated drivers and are still experiencing extremely low FPS/crashes. 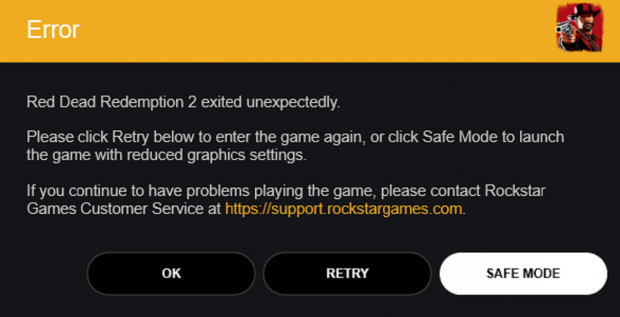 In other news about Red Dead Redemption 2 for the PC, NVIDIA's GeForce RTX 2080 Ti can't even hit 4K 60FPS on Ultra, find out more on that here. Also included in that link is the download link to the latest GeForce 441.12 drivers.