Intel will be launching its new Xe discrete graphics card in 2020 but the question will be when in 2020... with Intel's Core and Visual Computing Group and bad ass cricket fan and ice cream lover Raja Koduri teasing a June 2020 release for Xe just a few days ago on his brand-new Tesla. 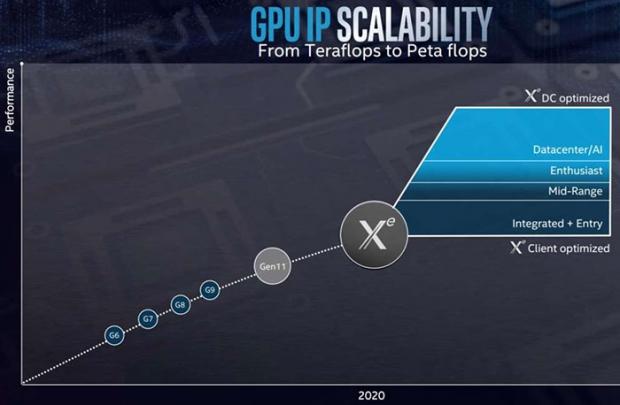 But now according to "industry sources" of DigiTimes, Intel will be launching its first Xe GPUs in mid-2020, packing GDDR6 memory and at least one model with just 25W TDP. Intel's new Xe-based graphics cards will reportedly be made on the 10nm process, but don't expect to be playing Control maxed out on it just yet -- it won't be beating NVIDIA's flagship GeForce RTX 2080 Ti... hell, it probably won't beat AMD's Radeon RX 5700 XT.

I've been hearing from my own sources (a couple of them just to be sure) that the first Intel Xe graphics card will be a developer kit of sorts, and not a full-fledged consumer-facing product ready to take on NVIDIA and AMD. Intel doesn't have a stable decade+ of graphics card releases, architectures, and what I think is the most important -- drivers, software, and game developer support.

I mean sure, Intel has integrated graphics -- but that's very different to a discrete graphics card and getting it to support the millions of games on the market in different operating systems and versions, different motherboards/chipsets/platforms, etc. The first Intel Xe GPUs will most likely be more datacenter/AI-focused (something Intel has admitted) but gamers and the public at large are expecting this overnight sensation.

We should expect Intel to go big (and not go home) before Computex 2020, riding the lightning right into the release of the first Xe product. The team that is now at AMD used to lead up Radeon Technologies Group and knew how to market their products, and drive up hype, so I'm expecting even bigger and better things now that they're at Intel.