THQ Nordic has revealed two collectors editions that Destroy All Humans! players will be able to pick up when the game releases. Prepare your wallet because it isn't cheap...

Above we have the Destroy All Humans! - Crypto-137 Edition, which contains a real-life backpack of the games protagonist Crypto, a 60cm statue of Crypto, a keychain, six lithographs, an eye-popping anti-stress squeeze toy, a large "premium" box and in-game skins for Crypto. This bundle is priced at a staggering $400.

If the above bundle is out of your price range, THQ Nordic has provided a second option that doesn't cost as much. This edition is called the DNA Collectors Edition and will retail for $150. The contents of this pack include; a 23cm Cypto'N'Cow figurine, a keychain, six lithographs, eye-popping stress toy, a different "premium" box, the in-game Crypto skins, and of course, the playable game. These collectors editions will be available for Xbox One, PS4 and PC users and if you are interested in purchasing one head on over to the THQ Nordic website here. 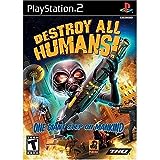