If you have used virtual reality before you would understand the urge to mess with your friends while the headset is on, so how about taking that to the next level? Of course Penn and Teller have already done that with their new virtual reality game.

Penn and Teller who are well known magicians have announced alongside Gearbox Software and publishing, Penn and Teller VR: Frankly Unfair, Unkind, Unnecessary & Underhanded. The game isn't your typical virtual reality experience and instead throws players into the realm of the uncomfortable and unsettling, just what Penn and Teller planned. According to the press release, this was the thought process by the two pranksters; "When a new mind-blowing technology comes out, the first thing Teller and I think is, 'How can we use this to help people play tricks, cheat, and prank'".

Penn explains how the idea came about, saying "Luckily for us, (and maybe less luckily for the world), Randy Pitchford, the big cheese at Gearbox, is our buddy, and worked as a professional magician. We are the same soulless motherhubbards. So, we've found a way for people to use VR as a tool to monkey with their so-called 'friends.' It's what we do, and we've done it." Randy Pitchford, President, CEO and Co-founder of Gearbox Software also commented on the collaborations with the magicians, saying;

"In our collaboration, we became animated by advances in the transformative medium of virtual reality and are now excited for fans of magic, pranks, tricks, video games, and VR to be able to experience an entirely new kind of interactive experience With Penn & Teller VR: F U, U, U, & U, you'll have the tools and technology to feel what it's like to *be* magicians like Penn & Teller."

Above you will find the announcement trailer which showcases a range of different environments and scenarios players will be able to experience. For further information regarding the title or if you want to pre-order the game, head on over to the official website here. Penn and Teller VR: Frankly Unfair, Unkind, Unnecessary & Underhanded will be releasing on the Oculus Rift, HTC VIVE, PlayStation VR and Oculus Quest on June 27th. 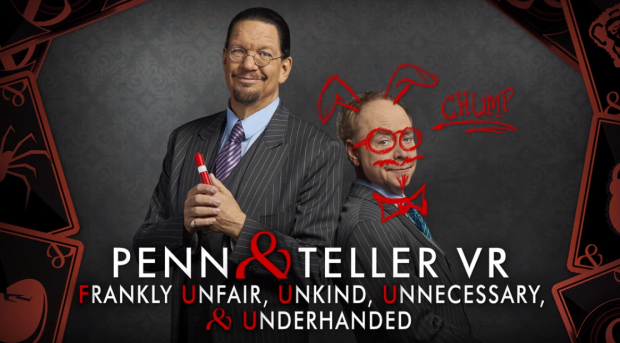