If you've got $1900 burning a hole in your pocket, then look no further than EVGA's new GeForce RTX 2080 Ti KINGPIN - one of the most exquisite graphics cards ever created.

EVGA has finally launched the much lauded new KINGPIN-approved and heavily custom RTX 2080 Ti graphics card with a custom PCB that allows for a socket-busting 520W of power. It still houses the same TU102 GPU with 4352 CUDA cores, 11GB of GDDR6 at 14Gbps, with its GPU clocked at 1770MHz boost. 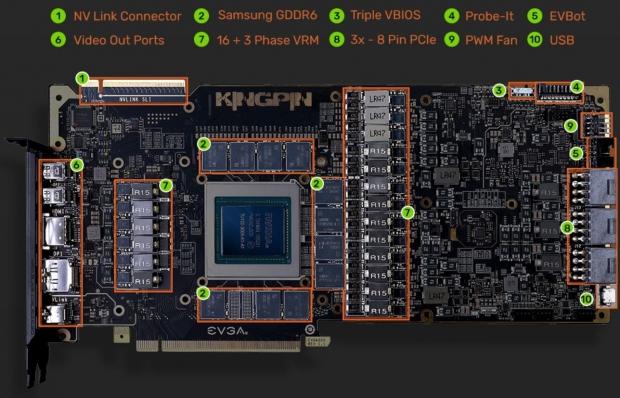 The biggest part of the new EVGA GeForce RTX 2080 Ti KINGPIN is definitely the 12-layer deep PCB that was constructed with the help of overclocker 'TiN'. We're looking at a beast of a PCB that is able to handle up to 520W from its 3 x 8-pin PCIe power connectors.

Back to the card itself, EVGA has used a hybrid cooling system that features a 100mm HBM fan that is placed on a full metal heat sink that is copper plated. On top of that the company has used 2 x 120mm PWM fans that are attached to a large 240mm radiator that EVGA gives you with the $1900 graphics card.

The VRMs are also cooled by their own modular heat sink that allows customers to install aftermarket GPU coolers, which is definitely a nice touch.

EVGA is currently selling its GeForce RTX 2080 Ti KINGPIN graphics card for $1899.99 on its own EVGA store, but it is exclusive to EVGA Associate members and Associate Code users.