GTC 2019 - NVIDIA CEO and founder Jensen Huang had some big things to talk about during his opening keynote at GTC 2019, with one of them being the announcement of the latest RTX servers that will be hot pieces of tech for Hollywood studios working on VFX. 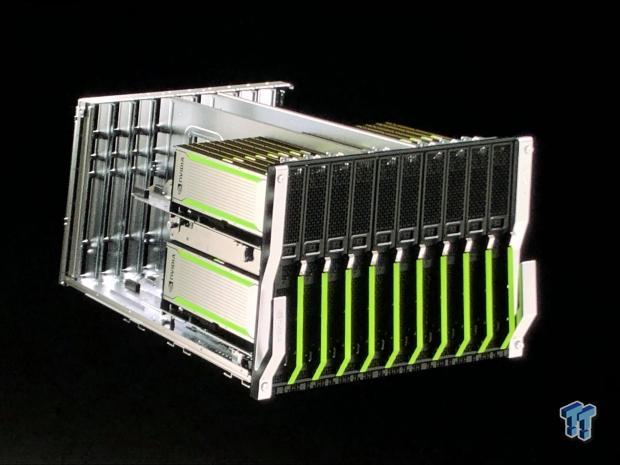 The new RTX server pods pack a huge 1280 Turing GPUs across 32 RTX blade servers, with 40 GPUs per server, each server consumes an 8U space in a rack. The GPUs inside are NVIDIA's new Quadro RTX 4000 and 6000 graphics cards, depending on the configuration and budgets of their customers.

NVIDIA said in its announcement: "NVIDIA RTX Servers - which include fully optimized software stacks available for Optix RTX rendering, gaming, VR and AR, and professional visualization applications - can now deliver cinematic-quality graphics enhanced by ray tracing for far less than just the cost of electricity for a CPU-based rendering cluster with the same performance". 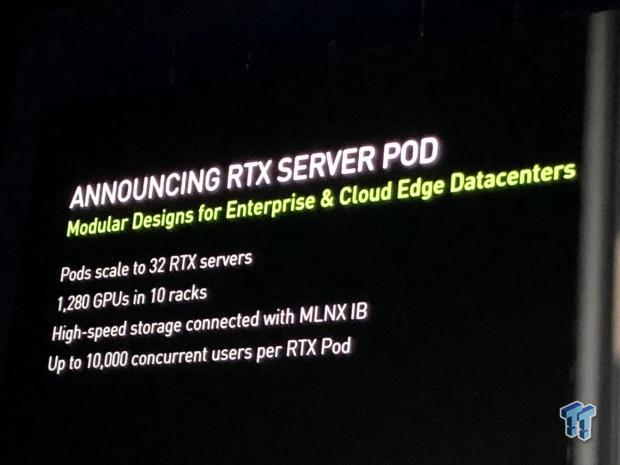 There's enough horsepower for multiple users to be accessing the RTX server at once, with network interconnect provided by Mellanox, which NVIDIA recently acquired for $6.9 billion. This right here should highlight why NVIDIA made the largest acquisition in its history, as super-fast interconnect speeds at a network level are imperative for data center work like this.

Dell, HP, Lenovo, ASUS, and SuperMicro will all have NVIDIA RTX servers to sell to their customers, all of which have been validated and approved by NVIDIA to work on their tools to manage the workloads being put on them. These servers are also not just for Hollywood and VFX, as NVIDIA said that they will be perfect for AR and VR applications at the edge, and then blasting them out over 5G to people. I think the VFX angle is definitely better, what about you?